Today is manufacturing and services day for Europe and USA. This will give us a chance to see how the economic recovery is going in Europe and the US.

Manufacturing and service sectors are very important for both the EU and the US but don´t expect much of a market reaction.

As we have mentioned recently, market sentiment and politics are driving the financial markets now and forex markets are no exception.

The markets are more worried about what will happen next in domestic politics and geopolitics, so the economic data gets left behind. Nonetheless, the accumulative economic numbers over a period of a few months should definitely have an impact on the markets. It is important that we analyze these numbers continuously to see where the major economies stand.

The French and German economic numbers have already been released and from what I can see they appear red on the economic calendar, which means that they have missed expectations.

Apart from French manufacturing which came out higher, the rest of the French and German numbers missed expectations. The Eurozone numbers, which are to be released shortly should miss expectations as well, according to what we have already seen today. 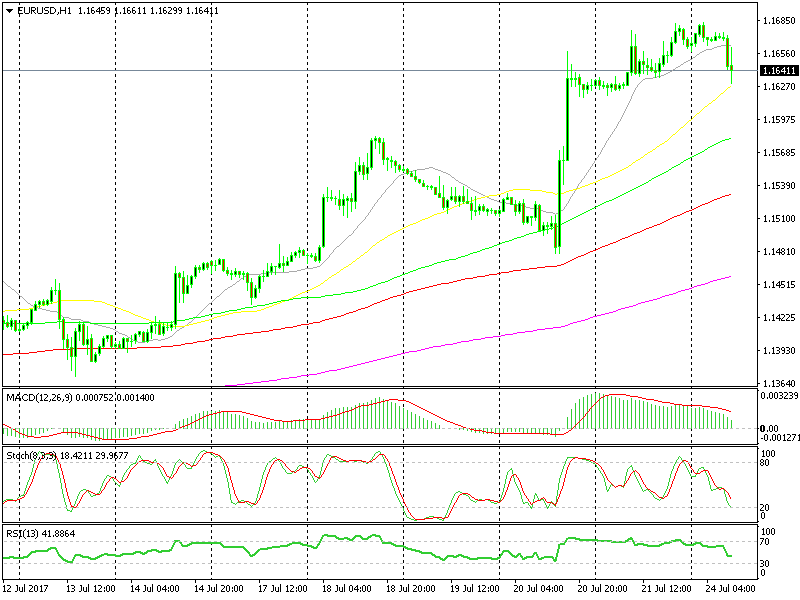 The Euro moved around a little when the French and German numbers were released and is now trading lower. However, it has shown signs of weakness all morning, so don´t be surprised to see it slide lower today.

EUR/USD broke below the 20 SMA (grey) on the H1 chart, which has been providing support since Friday. Let´s see if the Eurozone numbers can take us below the 50 SMA (yellow). If not, I will be tempted to open a buy forex signal around there.

Wait for the Retreat to End at the 20 SMA in Ripple XRP Before Buying Again?
49 mins ago

MAs Have Turned into Support for Ethereum, Pushing it Higher, Albeit Slowly
18 hours ago