Gold Forming An Uptrend Before FOMC

In the past two weeks, Gold has traded in a relentless uptrend, while these first 3 days of this week everything has shifted unexpectedly, but that´s Gold guys, it is very trendy and very volatile.

I don’t know if this is just a retracement because of the FOMC statement and rate hike decision today, but whatever the reason, the trade opportunities are there.

We posted the daily Gold chart yesterday; it looked bearish since the price formed a doji on Monday, followed by a bearish candlestick yesterday, which is a bearish chart pattern.

We did mention in that post that today was likely to be another bearish day and in fact, that proved to be true. Gold lost an additional $7 top to bottom, so if you played the bearish chart setup, then you must have made a killing.

By the way, colleague Arslan posted another Gold signal today which closed in profit as well, so it´s been a good day for gold.

But, the price stalled right at the 50 SMA on the H4 chart, as you can see, formed a hammer which is a reversing signal and now it is headed up. This is a bullish pattern, obviously. 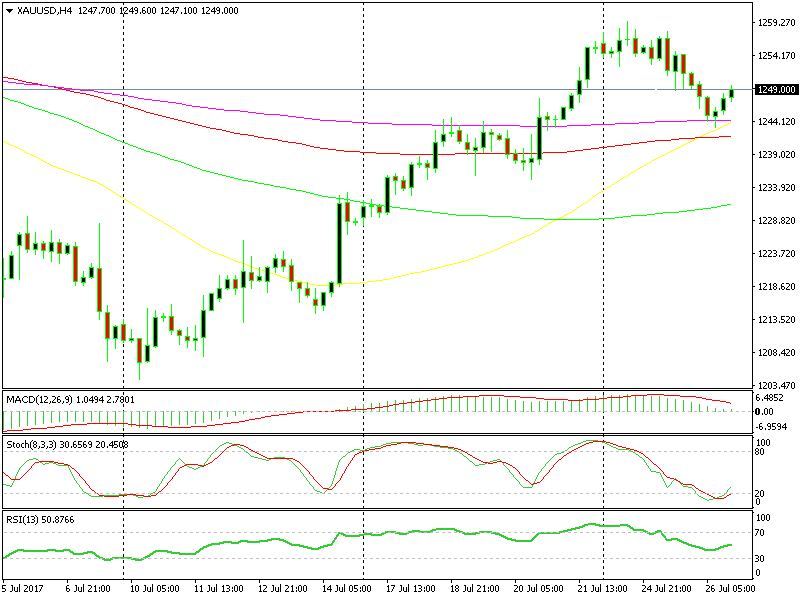 The 50 SMA (Yellow) is holding the uptrend in place

I would go long 2 candlesticks ago after the hammer, but the FED might ruin things for everyone later today. If they don´t though and remain uncertain, same as last month, then I might be looking to buy gold based on the H4 chart.

Technically it looks great, while fundamentally, uncertainty is great for safe haven assets. Add here Trump who is a constant threat for Gold sellers and knob heads in North Korea who are planning to test more intercontinental ballistic missiles today and everything falls in place for gold bulls.

But, we have to wait for the FED first. The bond market is leaning towards a hawkish FOMC statement so there is great risk involved, that´s why I prefer to stay on the sidelines until the statement has been digested by the market and then make a decision.

As I said, if nothing changes for the FED, then it´s a buy. If the FED turns hawkish, then obviously sell.