A Quick Trade In USD/JPY - Forex News by FX Leaders

A Quick Trade In USD/JPY

So the USD suffered another loss yesterday which is in line with Trump´s plan for a weaker dollar. Considering the strong decline yesterday and the larger downtrend, we´ve decided to open a sell forex signal in USD/JPY.

I mentioned in the previous market update that the USD decline should stop for the time being. The FED is interested in seeing the economic numbers in the coming weeks/months. I think the market won´t have the guts to continue this USD dumping until we get more evidence that the economic data won´t push the FED to tighten the monetary policy faster than they have planned.

That said, I don´t think that USD buyers will jump in or even get themselves organized anytime soon. So, for now, being short in the USD is the way to go for forex traders, at least for short term trades.

USD/JPY lost about 150 pips since the FOMC statement was released and this morning this pair has retraced higher. 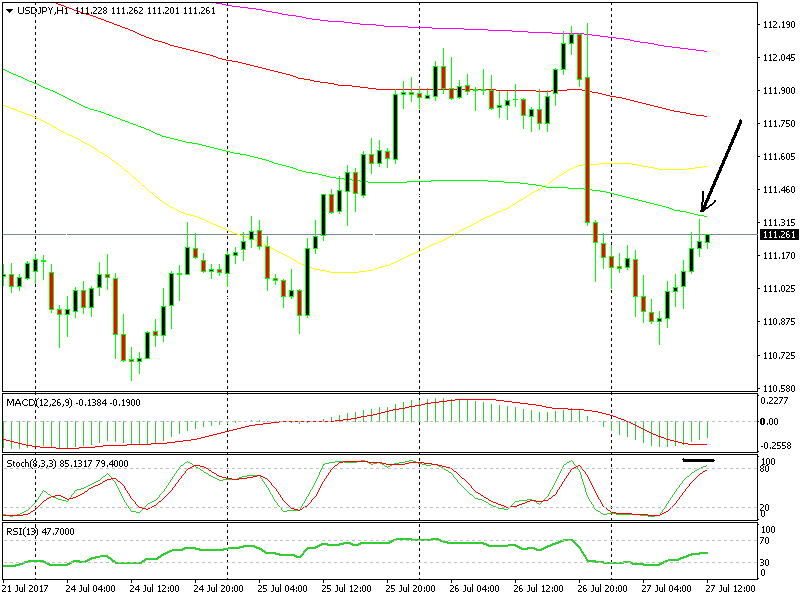 Is this the end of the retrace?

It got close to the 100 SMA (green) on H1 forex chart as you can see above and the previous candlestick closed as a morning star, which is a reversal pattern according to our candlestick trading strategy.

Stochastic is also overbought, which means that the retrace is over in this time frame chart. There are more than enough signals for us to consider selling this forex pair, which we did. Let´s hope we start the day with a winning signal after taking a hit on AUD/USD.