Forex Signals Midday Brief, July 27th – The Market Was Caught Wrong Footed By FOMC, But Is Coming To Terms Now

We finally got to see the FOMC statement for July yesterday. I mentioned in one of the updates yesterday that there was no reason to expect a hawkish FED.

There was no reason for them to step it up since the US economic data hasn’t changed a lot since the last meeting in June, particularly inflation, which has shown some signs of weakness or at least, it´s not as strong as the FED would have liked.

My colleague Arslan also had the same scenario figured out, as he explained in the morning brief, but the market had other ideas and expectations. Financial markets were expecting a more hawkish FED which was pretty evident on bond yields. They had been running higher since Tuesday.

Honestly, I don´t know where the markets got this idea from, because there were no indications for that whatsoever. There were expectations for a date to start withdrawing the stimulus package while the bravest ones were hoping for a surprise rate hike.

Nothing happened and in fact, the FOMC statement was slightly more dovish than the last one. Now the FED is more convinced that inflation will remain around these levels (1.6%-1.7%) until the end of the year, which is short of the 2% target that the FED has set.

Besides that, we still don´t know when they will start reducing the balance sheet, so the market was disappointed both ways.

USD Is Not Dead Yet

As we said in the first forex update today, the USD might be down, but it´s not dead yet. The markets were expecting too much and they got nothing from the FOMC statement, that´s why the USD lost around 150 pips yesterday.

But the USD selling is overdone now and today´s retrace is a sign that the market might have been getting ahead of itself.

The US economy is the best performing among major economies and the FED is on the steepest rate hike path. Actually, the FED is the only central bank which has increased the interest rates apart from the BOC and they´re now thinking about withdrawing stimulus, which means selling the bonds back in the market, thus reducing the amount of the USD in circulation.

That would be very hawkish for the USD, but the market is too focused on what´s going now, hence the big decline yesterday. Although, the market is not stupid and knows that the other major central banks are too far behind the FED regarding monetary policy tightening.

So, this might be the last push from USD bears, although who knows what might happen, Trump is in office. Besides, we´re almost in August now and the summer markets are not that predictable, particularly due to thin liquidity, that´s why we´re not buying the USD right now.

But, judging by techncials and fundamentals (leaving politics aside), I´m sure that the USD will come back strong, although we should give the market some time to see the bigger picture.

Trade: given the current negative sentiment words the USD, we opened two short term forex signals today a USD/JPY buy signal and an AUD/USD sell signal, both of which go against the Buck. We´re trying to catch a jump/decline after the USD retrace higher we saw during the London session. 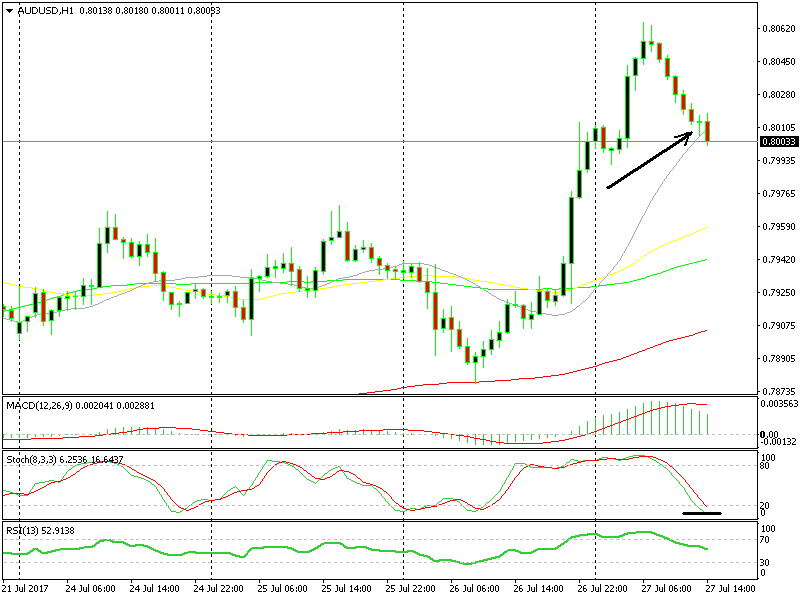 Stochastic is oversold, so the retrace is over on the H1 chart and the previous candlestick closed as a pin, which means a reversal is due

US Unemployment Claims And Goods Orders Might Revive The Buck

We have some important data coming from the US shortly, which might alter the FED´s outlook for the US economy and obviously impact the Dollar.

Last month´s durable and core durable goods orders were revised up so that´s a positive sign already and this month´s consensus is even better. Core goods orders are supposed to have increased by 0.4% while the main headline for the goods orders is expected at 3.5%, which is a huge jump.

Unemployment claims are expected to remain around 240k, so they won´t make a big change today unless they are off the charts.

If these numbers come as expected, then that would be a positive factor for the Buck, which will add up to the larger positive picture regarding the USD, although there´s still a lot of work to be done by USD bulls in order to reverse the decline.

The data for the US goods trade balance and wholesale inventories will be released shortly after, but they´re not that important for the USD at this moment in time so don’t get distracted by it.