Forex Signals Midday Brief, July 28th – Waiting For US GDP To Blow Some Life Into USD

After grinding higher during most of last year, inflation has stalled and even retreated somewhat globally during this year, with Europe being no exception.

Germans hate inflation and they were screaming and shouting last year as it was moving considerably higher after nearly a decade of low inflation and stagnation.

But they grew quieter as inflation stalled this year and energy prices retreated, or at least they formed a stable range where they have traded most of this year, with WTI (West Texas Intermediate) trading roughly between $45 and $55/barrel most of the year.

Then, around midday, the German CPI (consumer price index) was published and at 0.4% it was double the expectations.

I´m sure the Germans will start popping up soon warning us about the dangers of high inflation, but this month´s jump in EU inflation should carry on for another month or two so the ECB can take it seriously.

When the ECB acknowledges it, then that would be the time to jump on the Euro longs, but only if inflation remains upbeat.

A Good Day For GDP

So far, it´s been a good day for GDP; last month´s French GDP was revised 2 points higher, from 0.3% to 0.5%. This month´s number came as expected at 0.5%, but considering last month´s revision, we might get another surprise next month.

At 0.9% quarterly, the Spanish GDP reading was even better, but the market seems unfazed by these numbers because the US GDP report looms in every trader´s mind. It´s due to be released in about an hour, and we already had a surprise form last month´s number.

I don’t know if the market will be surprised if the number comes as expected even though it would be a great reading. But we have seen the market ignore and dismiss great US economic data time and time again this year.

But if we see US GDP come round 3% in Q2, then the US dollar will surely find some bids, but again I don´t know for how long because the market is not that fond of the USD at the moment.

If we see a negative number, then that would bring the next beating for the poor buck.

Trade: personally, I would sell GBP/USD if the US GDP comes above 2.5%, but the problem would be getting in, because forex robots are way too fast, particularly now that most of forex traders are on holidays. Remember that robots don’t go on holidays.

USD/JPY Is Trying To Make Its Mind Up

While most major currencies have gained massively this week in the expense of USD, the Yen has been trying to make its mind up whether it wants to go up or down. 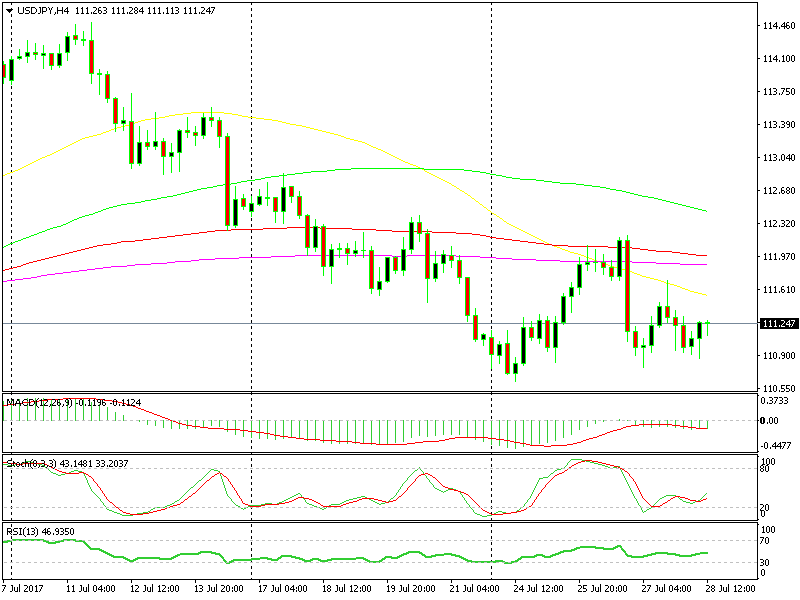 On Monday, the price stalled after this forex pair had lost 4 cents in the previous two weeks. Then it climbed about 2 cents higher until Wednesday when the FOMC statement didn’t satisfy market´s expectations for a more hawkish FED.

But, while the other currencies broke previous highs against the USD, USD/JPY couldn’t take out Monday´s low. That tells you that USD/JPY bears are not very confident.

So, a positive GDP number from the US today is likely to have a greater impact on USD/JPY as well as on GBP/USD, as we mentioned above. But, we´re staying on the sidelines until the US GDP report gets released, because we have seen so many horrible things happening lately in forex.

US Dollar Still Riding on Optimism From FOMC - Rate Hike in 2023?
24 hours ago