What’s Happening To Our AUD/USD Signal After The Weekend? - Forex News by FX Leaders

What’s Happening To Our AUD/USD Signal After The Weekend?

Last Friday we opened a forex signal in AUD/USD; on Thursday, the Buck had gone through some intense selling pressure. However, on Friday, things calmed down.

The market realized it had gone too far in one direction without any major reason to support that move.

The Aussie finally made its big break on Thursday; it broke convincingly above 0.80 which triggered the stop loss of our long term forex signal here. I now regret that we didn´t move stop loss above 0.81, which would give some room for the price to roam above 0.80, but that´s history now, it's better to look ahead.

Anyway, the price slipped back down below 0.80 that same day. After seeing this pair move below 0.80 again, I figured out that this spike above 0.80 was just a result of heavy USD selling on Thursday. Other than that, the big picture remained the same for AUD/USD. 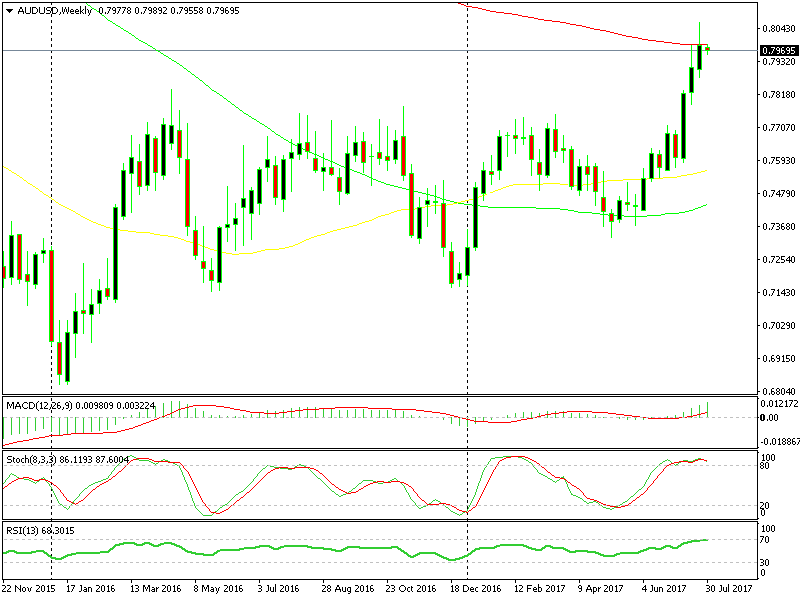 The 100 SMA held well last week despite being pierced briefly

The 100 SMA on the weekly chart had held once again seeing as the price closed below it. So, on Friday when the price tried 0.80 again, I decided to open the forex signal in AUD/USD.

It failed to hold above that big level on Friday even though it broke above it for the second time, so that was another reassuring signal for us.

As you can see from the weekly forex chart above, the price is having trouble breaking above the 100 SMA (red). We might see a reversal or a decent pullback in the coming days/weeks. That means that a long term sell signal in this pair is coming, so hang around.

Our short term AUD/USD signal nearly reached take profit last night when the market opened, but the 100 SMA stopped the decline on the H1 forex chart. We´re there now, heading down again. This moving average is providing support for the third time in the last 2 days, but I hope this time it let´s go. Third time's the charm?