Gold is up and running again after a tumble for no apparent reason. That´s the way gold has traded in the last 3 weeks and it looks like this week is going to be similar.

The uptrend in gold in not following a straight line as the hourly Gold chart shows. However, it´s consistent, it´s strong and every dip has bound bidders jumping in on the upward gold train.

The moving averages have done a good job indicating when the end of the dip is over, which is a good trading opportunity. It's true that you can´t just pick a moving average and buy whenever the price gets there. 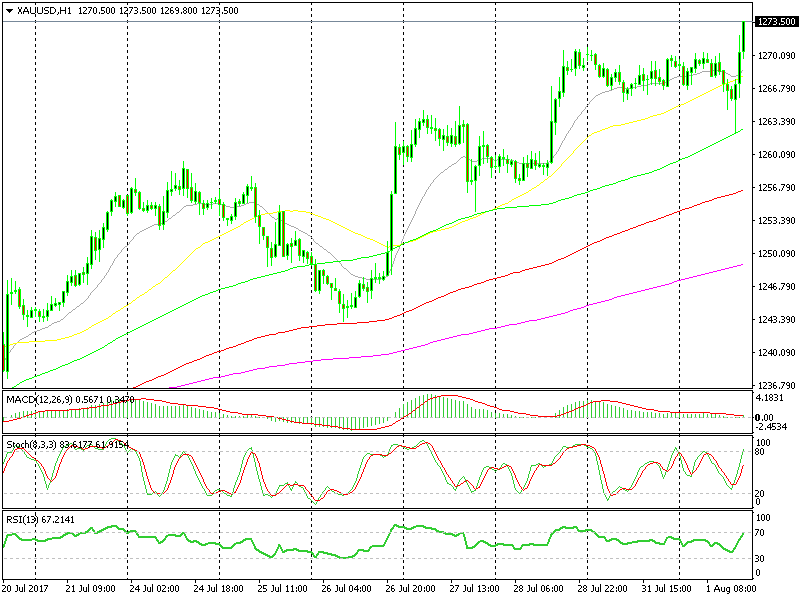 Do you trust moving averages?

But that´s the job we have to do as forex traders, we have to sense if a moving average is working. If the retrace is too strong, then we have to hold on and wait for another moving average which stands lower to take its place, just like in the image above.

The 50 simple MA (yellow) and 100 simple MA (green) have been holding the uptrend in place. However, you can also see the situation early last week when both these MAs gave up and the 100 smooth MA (red) took its place.

Today we saw another one of these occasions when the 50 SMA was broken, but the 100 SMA held the decline and reversed the price back up. I missed this opportunity, but if you bought at the 100 SMA, since the stochastic indicator was oversold as well, then you would have made 12 cents in profit, which is 1,200 pips.

Well, we missed that chance and gold has been surging since then. Don't' worry though, there will be another retrace lower sooner or later, so keep an eye on these moving averages if you want a good trade setup for buying gold.