The USD has gotten battered in recent months, and this has increased over the last few weeks. But we´re seeing a retrace take place, do you want to trade it?

But this morning we´re seeing a retrace take place in most major pairs, which of course include the USD. These pairs are almost oversold/overbought now, so there´s a strong case for a forex trade right now, or a few trades for that matter.

NZD/USD looks pretty luring for traders since this pair is sitting right at the 100 SMA on the H1 forex chart, with stochastic oversold of course.

The same goes for EUR/CHF and USD/JPY. I would love to sell USD/JPY since the downtrend in this pair has been pretty consistent. Although, the perfect selling spot would be around the 50 SMA on the hourly chart, which is standing around 20 pips higher from where we are at the moment. 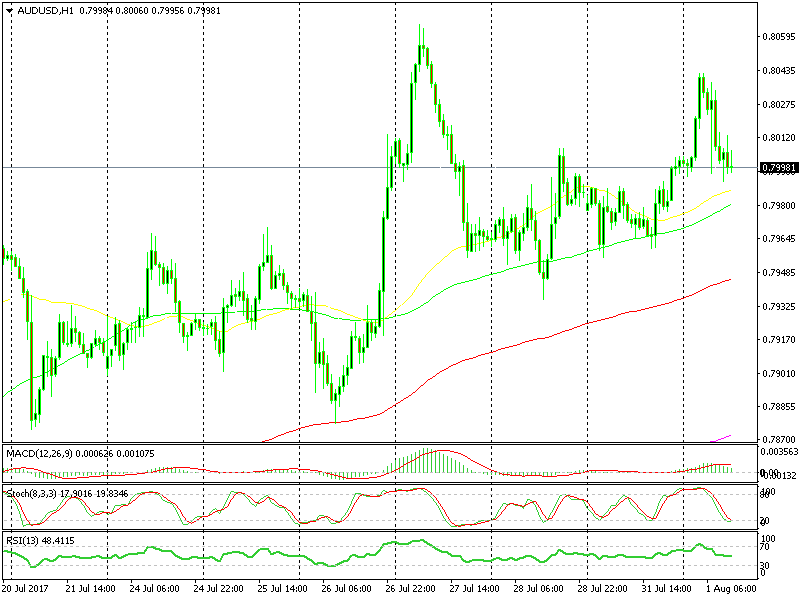 We opened a buy AUD/USD forex signal which looks pretty good at the moment. We chose this pair because the market was expecting the RBA to be somewhat dovish, but they remained neutral.

Actually, they were hawkish about economic growth but they also highlighted the stronger AUD as an imminent risk to the economy, so they balance each other out. At least the RBA wasn´t dovish, which was the reason for the spike in this forex pair overnight.

We decided to go long on AUD/USD, hoping that we will gain back the pips we gave to the market on our previous forex signal here.