Caution Is In The Air

Today the market seems to be quiet albeit cautious. We are hearing comments suggestion war from the US and North Korea. This is not what the markets prefer, hence the sense of caution.

The safe haven currencies are advancing slowly but steadily, as my colleague Arslan highlighted earlier on this morning in his morning brief.

USD/JPY and EUR/CHF have been steadily sliding lower since the Tokyo trading session began. These are both great signs of risk aversion.

The risky currencies, on the other hand, have been losing ground altogether; AUD/USD made a 50 pip dive this morning after topping at the 200 SMA on the H1 chart last night. We made a nice profit on this move after opening a sell forex signal last night, which we hope you followed.

USD/CAD has been in a solid uptrend in the last two weeks. It successfully extended the uptrend further today, breaking yesterday´s high.

The biggest loser today is the Kiwi. NZD/USD tumbled nearly 120 pips overnight after the Reserve Bank of New Zealand was more dovish than the market was expecting, or at least not as hawkish.

Commodity dollars are getting beaten up today

GBP/USD Is The Outcast Today

The British Pound has been the weakest link recently after failing to break the 200 SMA on the daily GBP/USD chart, This morning though it seems to have found its feet once again.

1.30 is acting like a magnet attracting the price to it whenever the buyers or sellers try to move it.

The reality is that there´s seemingly no power which can take the price too far from 1.30. The 1.3010-20 level used to be a support on Friday last week and Monday this week, but once broken, it turned into resistance 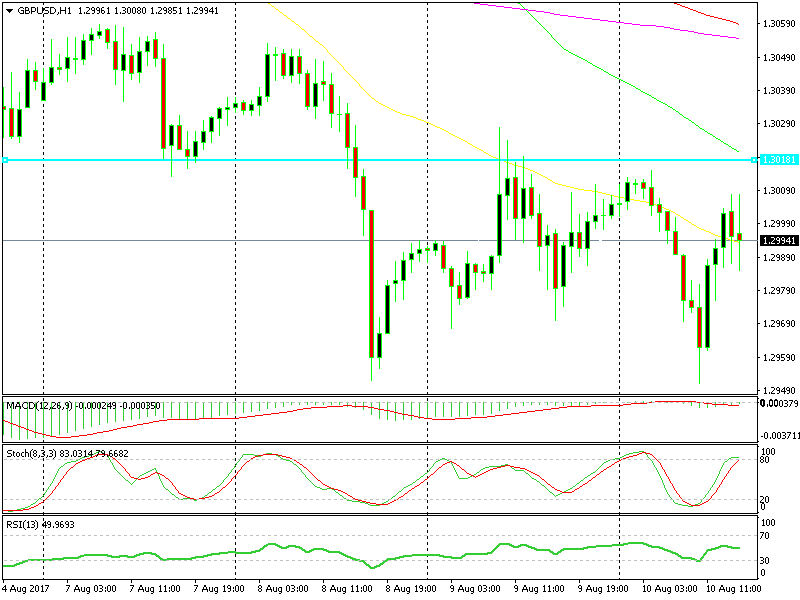 We just sold GBP/USD before reaching the resistance line

Can US Producer Inflation and Unemployment Claims Lighten Things Up?

The US producer inflation PPI (producer price index) and unemployment claims are scheduled to be released shortly.

This is supposed to be some very important data, but the forex market seems unaffected by this sort of data recently. Although, we can't rule out volatility in the case of surprising numbers.

Both PPI and unemployment claims are expected to remain unchanged, at 0.1% and 240k respectively.

If producer inflation jumps above 0.2%, and unemployment claims remain around these levels or lower, it´s likely that the Buck will push another leg higher, which means that EUR&USD and GBP/USD will enter another phase of selling.

As mentioned above in the trade idea, I would like to sell GBP/USD if the numbers are positive. Even if the numbers remain the same, I will still hold a bearish bias towards this forex pair. If the numbers are negative, that will complicate things for forex traders because the market is currently in favor of the USD.

A negative round of economic data today will make the near future unclear for most forex majors. Although, I would wait for the initial move to fade out and then try to buy the USD against the BP and the NZD, since the Kiwi is the weakest pair at the moment.