The financial markets are going crazy over the war sentiments created by North Korea & the US. The global stocks sustained a major hit, causing gold to soar nearly 350 points. Don't worry if you missed that big trade, I've got another great trade planned for today!

Before we begin, let's take a look at the major economic events today.

Japanese Yen- Japanese banks will be closed in observance of Mountain Day. Consequently, we may encounter thin trading volume during the Asian session.

US Dollar – At 12:30 (GMT), the Bureau of Labor Statistics will release the CPI data. It's forecasted to gain by 0.2%, beating the previous figure of 0.0%. For newbies, the consumer prices account for a majority of overall inflation. Inflation is important to currency value because rising prices lead the central bank to raise interest rates out of respect for their inflation containment mandate.

FOMC Member Kaplan is due to speak at 13:40 (GMT) about economic conditions and monetary policy at an annual continuing education event for accounting professionals, in Arlington. Later, at 15:30 (GMT), FOMC Member Kashkari will speak at the Independent Community Bankers of Minnesota Annual Convention.

Since, the Federal Reserve FOMC members vote on where to set the nation's key interest rates, their public engagements are often used to drop indirect clues regarding future monetary policy.

I'm not going to talk about why the global markets are extremely volatility these days. I mentioned in detail a couple of times and I assume my readers have a good idea. But, in case you are reading my articles for the very first time, refer to my previous update Forex Signals Brief August 10th for a review. In short, the renewed bullish momentum in gold was initiated due to the geopolitical tensions between North Korea and the United States.

At the moment, safe haven gold is heading north after breaking above the major resistance level of $1270. All the technical indicators are supporting the bullish bias for the pair. 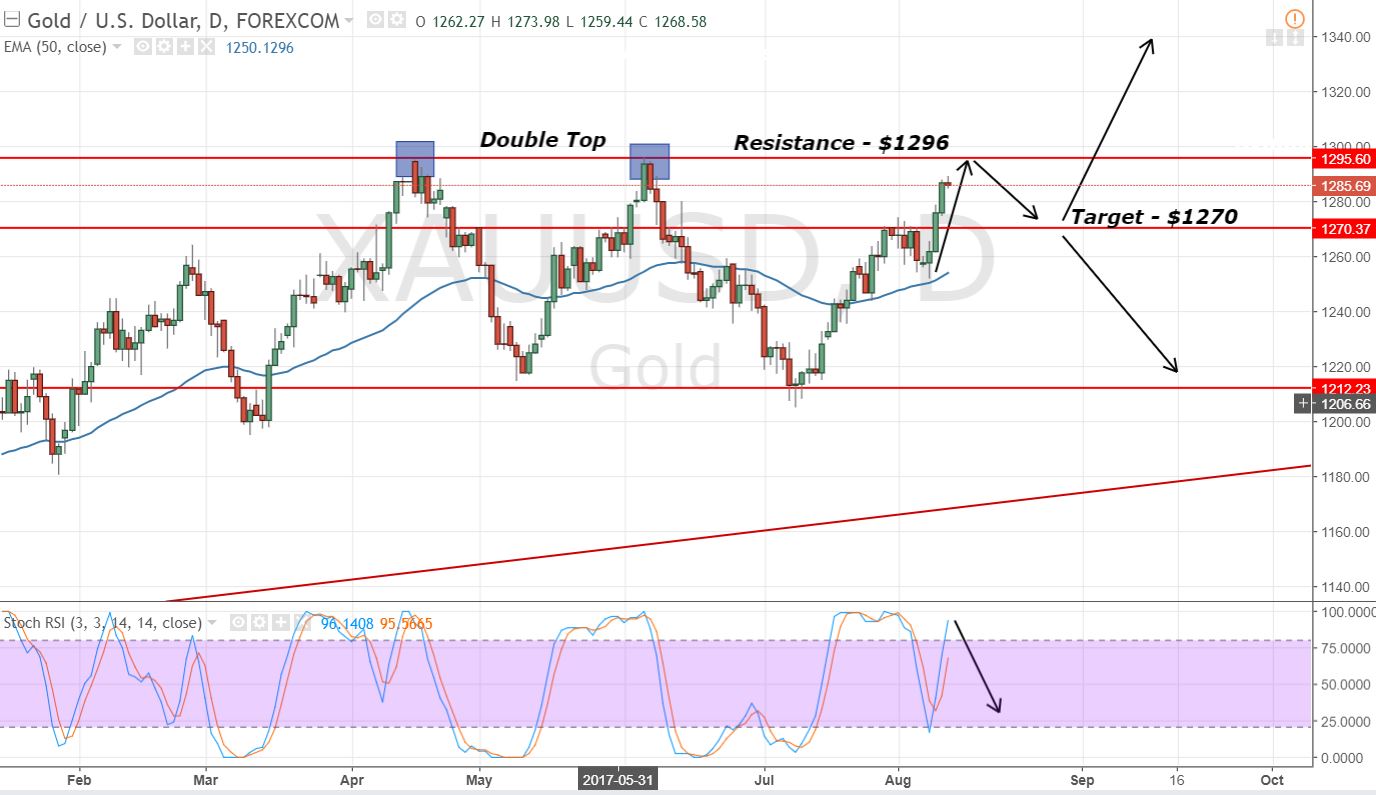 On the daily timeframe, I have highlighted the double top levels which are likely to control the bulls near $1296. I hope it stays there, otherwise, we are going to see some new bullish waves in the second half of the month. Gold prices are also holding above 50 – periods moving averages, which signals investors' bullish bias. Seeing as the market is far away from the EMA, can we expect an EMA retest? Personally, I'm expecting it soon.

Good luck traders and have a lovely weekend!

Forex Signals Brief for Jul 30: Is an XRP Settlement Close?
10 hours ago