The Market Is Treading Water

The financial markets have been uncertain for quite some time – the UK is a mess at the moment, the Japanese economy is not out of the doldrums, the EU economy as a whole is not doing bad but some of the peripheral countries are not doing great. However, most of the uncertainty comes from the US; no one knows what path politics and the economy are going to take.

Add the inflation report, which will be released shortly, and the uncertainty becomes too much, causing the chaotic price action this morning.

The GBP and the AUD have been losing ground against the USD this morning, while the Kiwi and the CAD have gained against the Buck. The Euro on the other hand, is holding up pretty well, while USD/JPY is mostly unchanged from last night.

Traders have been trying to position themselves before the big release, which will be in a few minutes. Traders are closing whatever positions they have open, hence the chaotic activity in all forex majors.

We opened a sell forex signal in NZD/SD a while ago after the overnight pullback, hoping that this pair would follow the technicals and turn around since six indicators were pointing down. But, the chaos is making things a bit difficult for us. I hope that we reach TP before the inflation report is released so this trade is not beholden to those numbers, thoughI doubt it.

CPI and FED Members Might Give US Some Directions

The US CPI (consumer price index) is the elephant in the room today. As I mentioned above, the market is confused about the US economy. It is doing OK at the moment, but there are some blips such as slow wages, weak retail sales and durable goods orders.

With the stagnation in oil prices, inflation has stalled after a decent run last year, so today´s CPI numbers take on additional importance.

Yesterday, we saw the USD dive around 70-80 pips after the disappointing US PPI (producer price index) numbers. This was a sign that the market is anxiously waiting for important US economic data in order to figure out where the US economy is headed.

CPI and core CPI are both expected at 0.2%. However, after yesterday´s miss in PPI numbers, the risk is on the downside, preparing the market for some soft numbers. Having said that, surprises are what move the markets most, so a positive reading today is likely to send the USD surging and EUR/USD diving.

Even if the numbers come in as expected, the sentiment will be positive for the USD in my opinion, because traders will be relieved that CPI is not following PPI down the drain.

Trade Idea: Buy USD/JPY at spot if the CPI reading comes in above expectations. If the numbers are 0.2%-0.3% then I would close after an 80-100 pip climb to 110. If they came above 0.3%, then I would hold on to that trade for dear life, because the winning potential is at least a few hundred pips.

AUD/USD Reverse Is Shaping Up Nicely After Dovish RBA Lowe

In the last couple of months, AUD/USD has put up an impressive five cent run to the upside, but the picture is slowly changing. 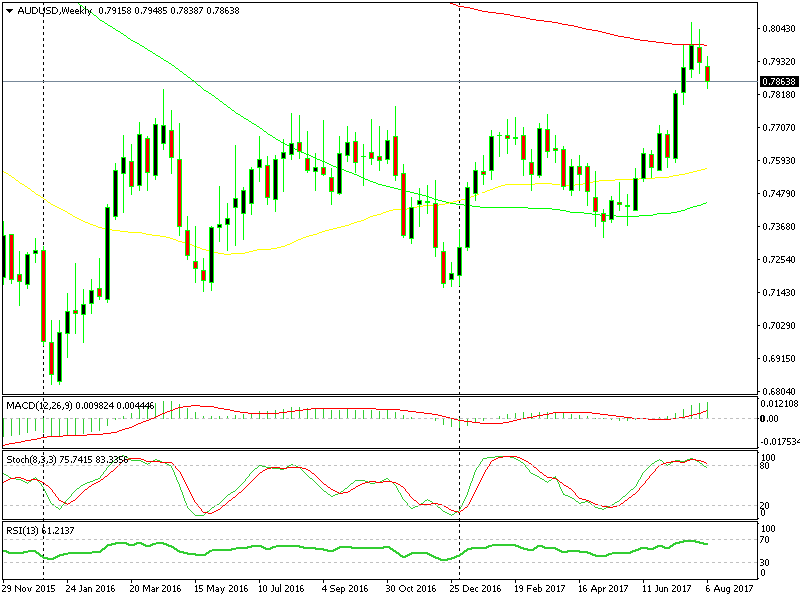 As you can see from the weekly forex chart above, the price is severely overbought and now both the stochastic and RSI indicators are heading down.

Now the price is about 200 pips lower than the top but there´s still a lot of potential to the downside. The first target would be the previous resistance at 0.7750 which might turn into support now.

Earlier this morning, the RBA (Reserve Bank of Australia) member Lowe delivered some dovish comments. He said that the RBA was prepared to intervene in the currency market, but not at the moment. They definitely don´t like AUD/USD up here.

The US inflation report today might ruin everything, but if we don’t see some horrible numbers, the future for this forex pair is bearish.