Are UK Earnings Going to Give GBP A Kick Today? - Forex News by FX Leaders

Are UK Earnings Going to Give GBP A Kick Today?

In a while, the UK employment report will be released. This will be the straw that broke the camel's back for the British Pound if it misses expectations. This is a very important piece of data; the second one this week, so it will set the tone for the week.

Yesterday the UK inflation (CPI) report remained stagnant on a yearly basis and it declined 0.1% month/month. The Pound took a dive right after the release and it didn’t stop until GBP/USD reached 1.2847. It was helped by US retail sales which posted an impressive jump from the previous month.

Today we get the UK employment report. The average earnings (wages) index will be the most important aspect. The unemployment rate might provide some action as well if it deviates too much from the consensus, which remains at 1.8%, same as last month.

Rather than a lagging indicator, wages show the current situation of the labor market as well as the business environment and it is also an indicator for near term retail sales since they will be poured into store cash tills shortly. 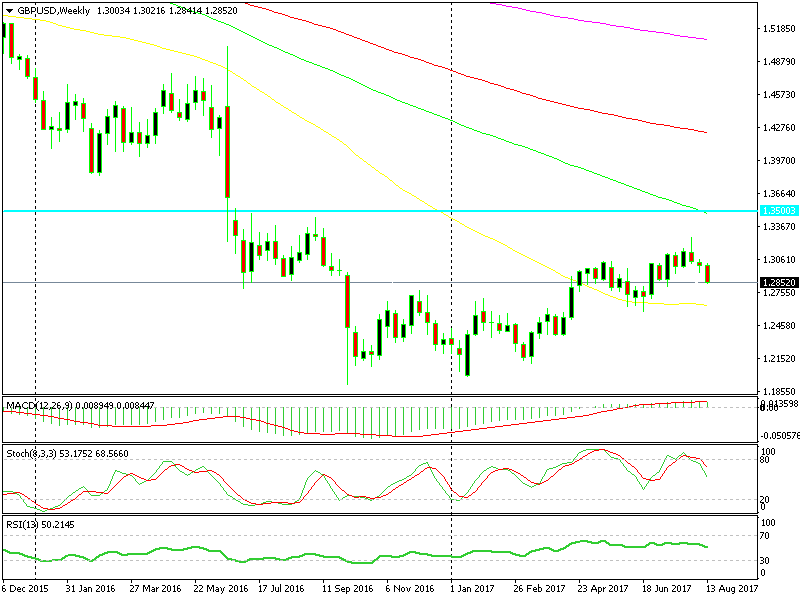 If average earnings come in below 1.7%, I´m afraid that this will be a devastating blow for the Pound for the short term, particularly GBP/USD.

Trade Idea: I would sell GBP/USD at spot because I don’t think that US building permits or housing starts will be able to ruin the trade. Although, I wouldn’t expect to fall beyond 1.2650 where the 50 SMA (yellow) is holding because that would extend this week´s downward move to 500 pips. If we get down there today I suggest that you take most of your trade off the table. We will try to get in as well, but that will depend on the slippage.