Does EUR/USD Look Bearish To You? - Forex News by FX Leaders

Does EUR/USD Look Bearish To You?

We have a live signal in EUR/USD which we talked about yesterday before the FOMC minutes were released and the USD fell about 10 pips.

At the time, this signal was going pretty well because we were around 100 pips in profit and this forex pair was still sliding lower.

But Donald Trump has the habit of ruining perfectly good trades and yesterday we witnessed another one of those cases when he dismissed two of the economic committees. Shortly after that, we received the FOMC meeting minutes and the USD took a beating.

The price moved above the 20 SMA on the daily chart which we highlighted yesterday and closed above it. I was expecting it to provide some sort of resistance, having provided support previously.

Although, we´re back below it today and the EUR/USD sellers have gotten rid of almost all of yesterday´s gains. The last two H4 candlesticks look pretty bearish, but that´s not why this forex pair looks bearish to me.

The price action we have seen since yesterday afternoon makes me think that the downside is more favorable right now. Yesterday we jumped nearly 100 pips, but there was no follow through, which is a signal that there was trouble on the top side. 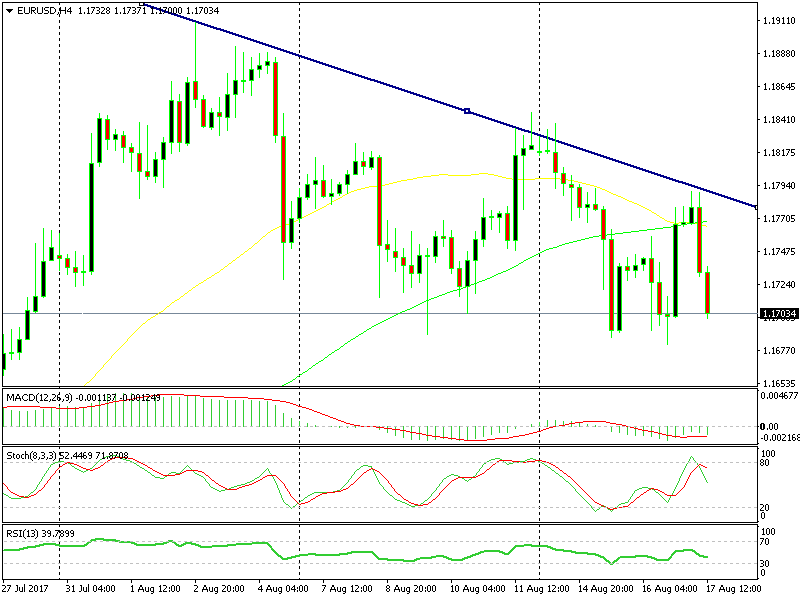 A bearish trend has formed in the last 3 weeks

Early this morning buyers had another go at the top side, but they couldn’t reach 1.18 and now we're 100 pips lower, threatening 1.17 again. If the price can´t hold on to the gains, then it´s likely that it will reverse and finish a lot lower.

That´s what´s happened to the EUR/USD today and according to the price action strategy, this sort of trading points only in one direction; down. But 1.17 has to go first and then we have to take out 1.1680 which was yesterday´s low, before heading further down, so watch these two levels.