We´ve been going up and down all day since the Tokyo session started. Some majors have been moving up while others have been losing value without any apparent reason. Is the US session going to be same?

I think the next couple of days will be similar to what we´ve seen so far this week. The market is likely to remain stuck in tight ranges. Traders are scared to take pairs in a specific direction until the big guys start speaking at the Jackson Hole Summit on Friday afternoon.

Technically, the financial markets are not exactly running anywhere, but they´re moving around. The Aussie and the Kiwi were the first to make a move early in the Asian session, with NZD/USD losing nearly 80 pips. Although, right now they´re retracing higher, which might provide us with some trading opportunities, which we will explain below in the “trades in sight” section.

The Japanese Yen is being particularly stubborn today, especially in the last hour or so. Again, I can’t see any apparent reason for this and it definitely wasn´t the slightly positive Japanese manufacturing numbers we saw early this morning.

If we look at European currencies, EUR/USD is considerably higher after this morning´s jump, which followed the good Eurozone manufacturing numbers, but the German bond yields are not following the Euro higher. Although, that´s another matter which we will cover shortly because it is a sign that the Euro might reverse down.

On the other hand, GBP/USD is still lower. It did break the 1.28 level but it´s now back up above it. So, nothing is clear at the moment, therefore we need to be careful guys. 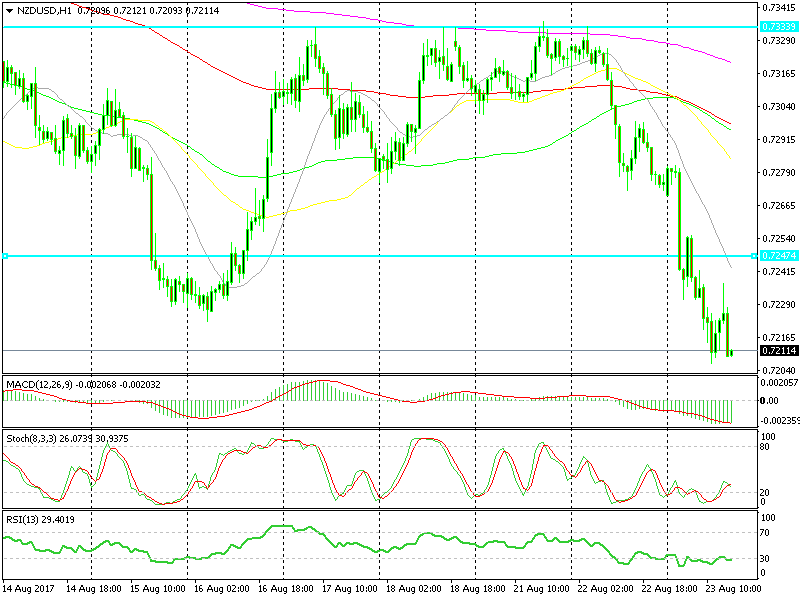 I was thinking of placing AUD/USD here instead of NZD/USD since there are a couple of moving averages providing resistance on the hourly AUD/USD chart. However, the Kiwi looks too tempting for shorts since it has been so weak recently, thus minimizing the risk for sellers.

Right now we are sitting at 0.7220 after making a pullback higher. Although, as I said above, I fancy selling this forex pair around 0.7250 where we can find the prior support level, so I’ll be sitting on my hands until then. 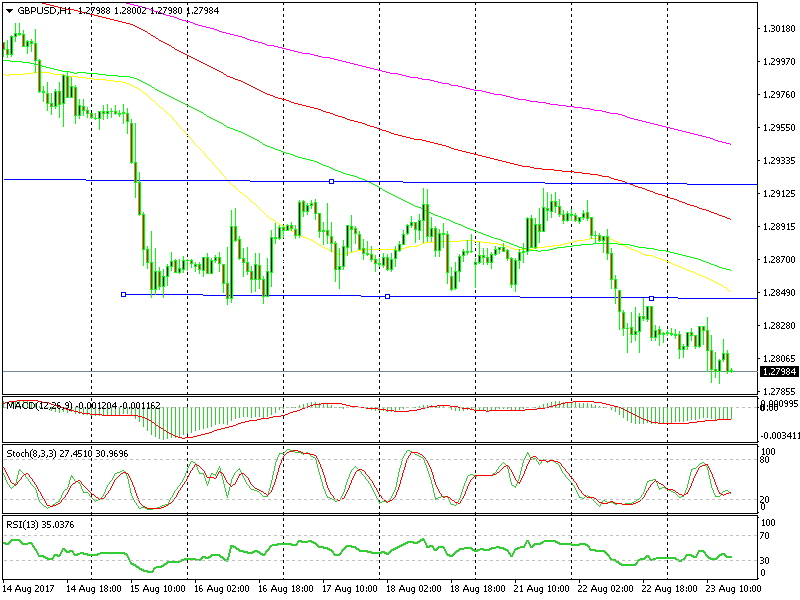 The British Pound is another currency which is going through a period of weakness, having lost about 5 cents against the US this month top to bottom. Besides that, the prior support at 1.2850 has already turned into resistance.

In yesterday´s midday brief, I highlighted this level and gave a trade idea. Basically, I said that since the support was broken, selling pullbacks against it would make perfect sense. Well, the buyers tried that level after we posted the update and after failing to retake their position, this forex pair headed down and lost around 50 pips. We can try the same today if we manage to climb up there.

That is it for today. There aren’t many forex events and the market is a bit numb, which I expect to continue throughout the day. Yet don’t get fooled, because US traders are coming soon and we might get a spike or two in some pairs.

Overall, I suggest that you keep stops reasonably tight since you can´t trust any direction and the moves are not enormous.