Forex Signals US Session Brief, August 28th – The Dollar Is Down After Yellen, But What’s Happening to EUR and JPY After Draghi and Kuroda? - Forex News by FX Leaders

Forex Signals US Session Brief, August 28th – The Dollar Is Down After Yellen, But What’s Happening to EUR and JPY After Draghi and Kuroda?

We know now what Janet Yellen said at the Jackson Hole summit: absolutely nothing regarding monetary policy. But there were other important participants in that meeting such as the ECB president Mario Draghi and the BOJ head Kuroda. Did they have anything to say about their monetary policy? In this midday brief, we will see what their comments were and how they will affect their currencies in the near term. 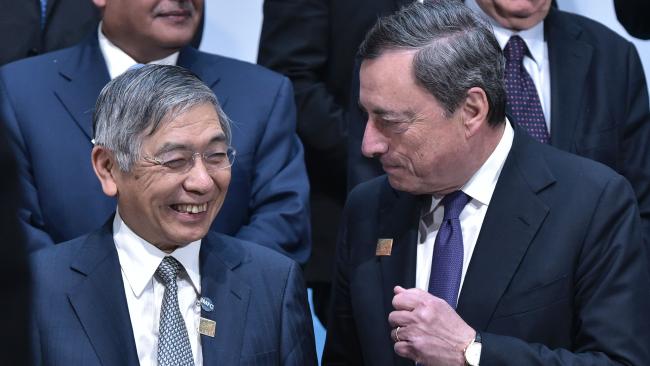 We´re still in the game if you forgot about us

Draghi and Kuroda Are Sitting on their Hands

The Euro tends to do the opposite of the USD; when the Buck goes down the Euro shoots higher and the same happens when Draghi remains silent, unlike the USD, which dives when Yellen has nothing to say. The reason for this is that the market is used to seeing the Euro dive when Draghi speaks because he generally likes a weaker Euro, so the Eurozone exports become more competitive.

That wasn’t the case this time. Everyone seemed to agree that Super Mario was going to slap the Euro down once again, given the recent strength that we have seen in this currency during this year.

The Euro rallied jumped around 50 pips after Draghi let the forex traders down, especially the EUR/USD traders. EUR/USD sellers had two cards in their hands and were hoping to get a bonus from either Yellen or Draghi, which would make this forex pair enter a decent retrace, probably to 1.15 or even to 1.10-11.

But Draghi didn’t mention the Euro strengthening, which he used to do quite often when this pair was heading towards 1.15. Fundamentals and politics have changed; the Eurozone economy is in a much better place now while the Trump administration is pressuring major central banks to stop intervening in their currency activating EUR/USD buyers.

The BOJ (Bank of Japan) chairman Kuroda was a bit more vocal, but that went against the Yen, which might have been intentional. He said that the 4% growth can’t be sustained and the monetary accommodation will continue. USD/JPY didn’t climb higher after those comments, but the USD has been weak enough. The Yen doesn’t seem to be able to take advantage of that today, probably due to Kuroda’s comments.

These are strong indicators which show that NZD/USD is still very vulnerable despite the 30 pip jump on Friday. By the way, that was the smallest jump/dive among major forex pairs. That´s the strongest signal you can get in this game because as we know, what can’t go up will eventually go down. 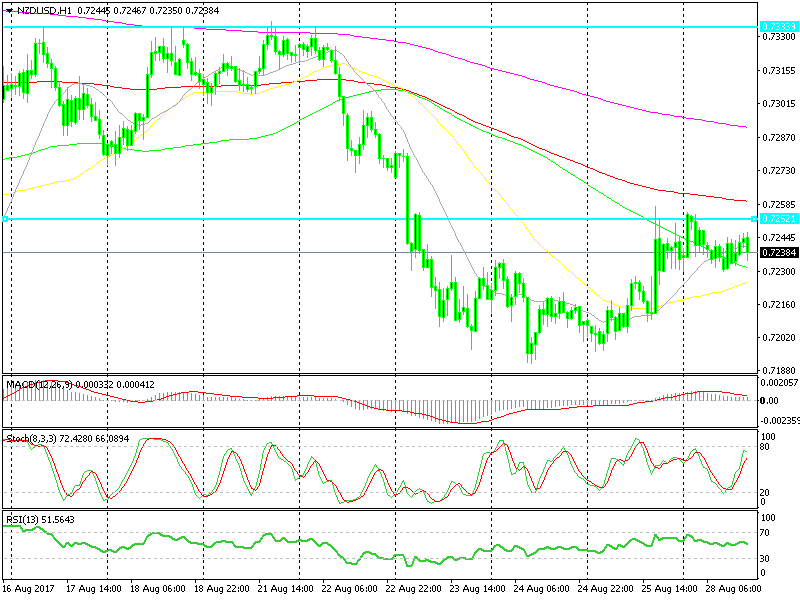 The resistance at 0.7250 remains intact 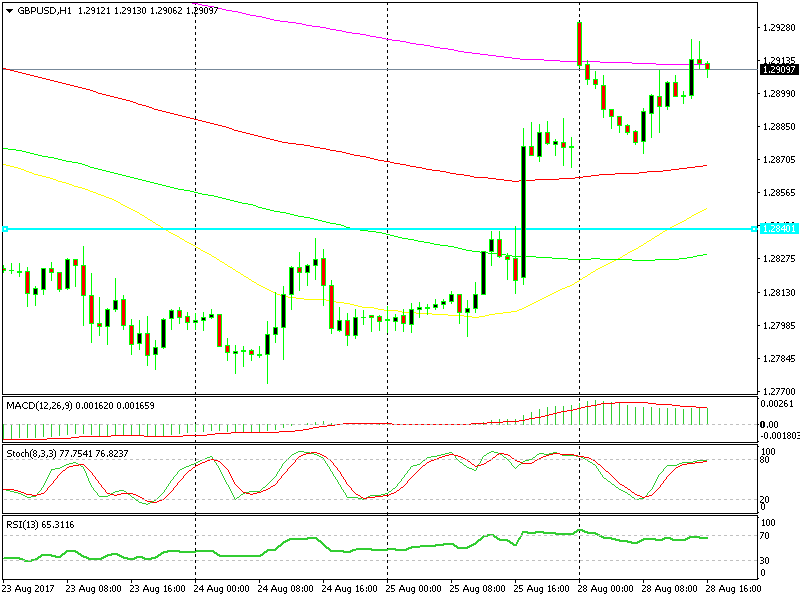 The 200 SMA is providing resistance here

I know that this is a countertrend trade, but the price action is showing some signs of weakness in this pair today after opening 50 pips higher last night. The 200 and 100 SMAs are providing solid resistance on the H1 and H4 charts respectively.

Besides that, the previous hourly candlestick closed as an upside down hammer which is a reversing signal and the USD decline seems to have stopped. We just opened a sell forex signal at 1.2915, so let´s hope that the price follows this logic.

After lots of assumptions and expectations about the Jackson Hole summit, we are right where we were beforehand; the central bankers want more time so nothing is changing anytime soon.

The Buck is relatively lower today but it seems like it isn’t going any place soon either. We will have to wait for more economic data to make things clearer for the major pairs.

EUR/USD Makes a Break Above MAs, After US Q2 GDP Misses Expectations
20 hours ago