USD/CAD Extends the Downtrend Despite Hurricanes

It is the hurricane season now in the US and the south is having one just now. Hurricane Harvey is sweeping Texas and that’s hurting Oil prices today, both of which (WTI and London Brent) have lost about a cent today.

I’ve been hearing many forex analysts screaming “sell USD/CAD” in the last couple of days (yes I keep an eye on the market/news during the weekend as well) but that´s not correct in my opinion.

The assumption is that oil production is going to fall in the south of USA and in the Gulf of Mexico so prices will go up because of that.

Well, there´s another problem which has arisen for Oil buyers; Oil refineries are the ones which have been hit by hurricane Harvey so the demand for crude oil has fallen. We should remember that the consumer doesn’t buy Oil straight from the wells. Instead, it goes to the refineries first, but they´ve been shut now.

Who would blame them? I have only experienced a few strong storms in my life and they´re pretty scary, imagine witnessing a hurricane or even worse, living somewhere where hurricanes are the norm.

Anyway, that´s the reason Oil prices have been sliding today but the Canadian Dollar has been climbing higher too, with USD/CAD slipping lower in a constant downtrend. 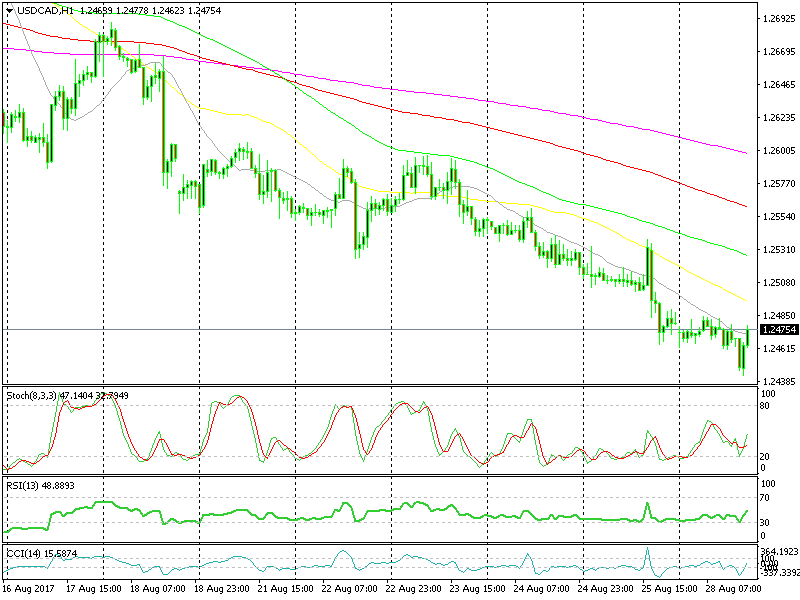 Which moving average are you selling at?

That said, in the last couple of hours, we saw a jump in this forex pair which has taken the price above the 20 SM on the H1 chart. Anyway, we´re heading for the 50 SMA (yellow) and the 100 SMA (green) so I´m planning to sell somewhere around there. Although, I will check the price action to pick the right moving average.