Yesterday was Monday and North America was off so the forex market was pretty quiet. Not much has changed today. Despite more aggravation between North Korea and the US, we’ve been seeing the same sort of action in most forex pair. Although, volatility is picking up and US traders will enter the market soon, so there is light at the end of the tunnel. Let´s see what’s been going on in the markets and take a look at the best chart setup to trade. Those uniforms are going to do the job for the Koreans

Today is a services day with PMI reports coming out of Asia and Europe. As the saying goes, you can predict the weather by the morning sky, and the Australian services offered the first sign that it wasn’t going to be a good day.

The Australian AIG services index lost more than 3 points, but the Aussie didn’t blink. In fact, it shot 50 pips higher when the Chinese Caixin PMI beat expectations by a full point. That shows the strong connection between the Australian economy and the AUD with the Chinese economy.

That was the only positive services report today though. The European service reports (French, Italian, Spanish & German) came out below expectations although they’re still at a decent level.

The UK services also declined. While in Europe the situation is stable, we can’t say the same about the UK and this report darkens things further. Yesterday the UK construction report showed a substantial slowdown so nothing looks good for the UK right now. The Pound doesn’t really give a damn as GBP/USD is 40 pips higher this morning.

As funny as it sounds (or scary to some), the North Koreans really believe they can take on the world. Or maybe they are just playing their cards? Who knows, but the crisis is still here and the market doesn’t know whether to take it seriously or just ignore it as another North Korean bubble.

Financial markets are definitely not ignoring it and the Yen has gained another half a yard today. Nevertheless, the Swissy is down, which is a signal that the market might already be getting tired of these war games.

The North Korean ambassador to the UN said that the “self-defence measures are a package gift to the US and more are on the way” a while ago, but the market didn't move after those comments so perhaps the market is indeed tired of this “war”.

If that’s the case, then we better look for longs in USD/JPY because we are close enough to the big support level around 108. Although, not just yet. At the moment I still hold a bearish view for this forex pair. 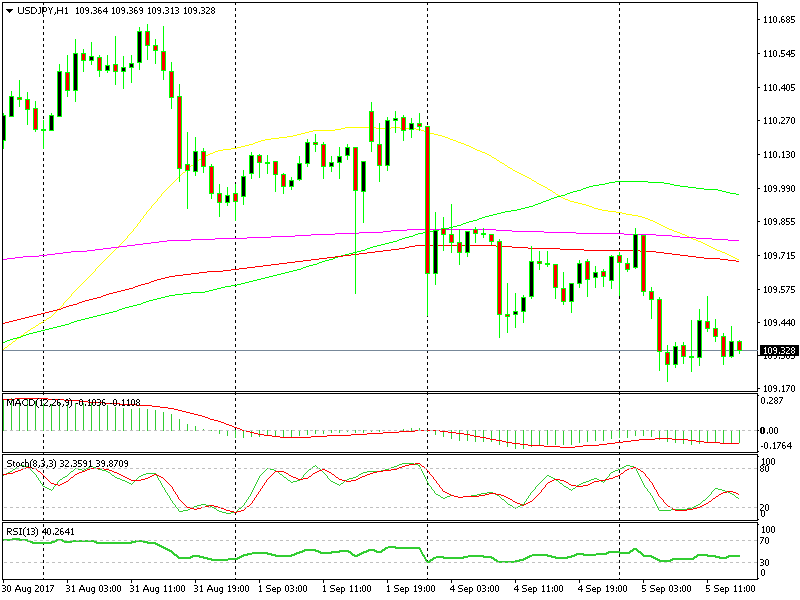 We´re close to the massive support area in this forex pair and the market is getting tired of North Korea so this pair might reverse anytime if parties decide to sit down and have a talk. Though, that’s not happening at the moment, especially after the comments from the North Korean ambassador.

Until that happens, we will keep our bearish bias towards this pair and look for shorts. A nice place to sell this pair would be where the moving averages are gathered on the hourly chart, around 109.70-80. We missed a chance to open a sell forex signal yesterday, so we’ll be looking to see if we can get that chance back today.

The forex market continues to trade in tight ranges today waiting for God knows what, probably a conflict between North Korea and the US? Chances are that the waters will calm and the market will finally choose a direction, naturally against safe haven assets. Until then, we must trade cautiously.