Forex Signals US Session Brief, October 6th – The US Employment Is Out! Is It Good or Bad? - Forex News by FX Leaders

Forex Signals US Session Brief, October 6th – The US Employment Is Out! Is It Good or Bad?

The US Dollar has been grinding higher this morning as if it knew that the US employment report would come out positive. Actually, there are good and bad components in the details, but the USD is looking at the positive side of the report and making a run for the moment. 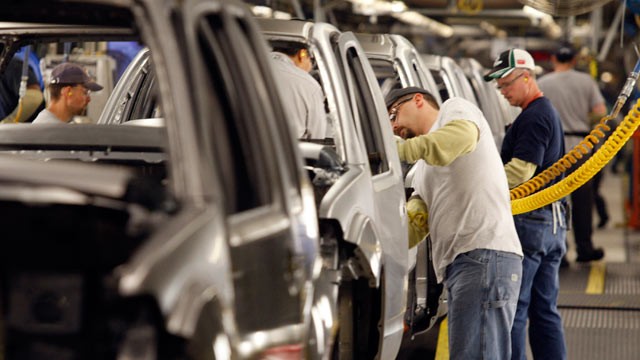 The US workforce shrank due to hurricanes

The forex market has been waiting for the US employment report the whole week, since there weren't any important economic releases this week. Forex traders have always seen the negative side of the US economic data recently; even when the data was positive the USD would tumble after a short-lived jump.

Today though, judging by price action, I was suspecting that the data would be positive and the Buck would climb higher. That’s because the Dollar had been crawling higher all morning today.

The report was published and it was positive in my opinion. Yes, the non-farm employment change came out negative, but remember that the survey took place right at the height of the two hurricanes. A lot of businesses were closed during that period, and people weren’t really looking for jobs down south, they were just trying to survive.

The trend of this indicator is up and besides, last month’s number was revised higher to around 170k. So, it is clear that this bump was due to the hurricanes.

The rest of the report was amazing. The unemployment rate fell to 4.2% from 4.4% previously. But the most important component of this report, the average hourly earnings, made an impressive jump. Expectations were for a 0.3% increase, but the actual number came at 0.5% and last month’s number was revised a point higher too.

The Dollar surely took notice of the positive reading and climbed about 40 pips higher, but the climb has stalled at the moment. If the USD doesn’t reverse soon like we have seen it do many times this year, then I think that there some more room for it to push higher.

USD/JPY has been in a strong uptrend since the beginning of September. The price broke the long term support level at 108 and everyone thought that was it for buyers. But the reverse happened just as quickly and this pair climbed many cents since then.

In the last couple of weeks though, the uptrend slowed and there was a period of consolidation. The price formed a top around 113.20-30 which acted as resistance.

Although, it couldn’t hold the buyers after the positive US employment report. It broke without much resistance and now it has turned into support. This means that we might buy USD/JPY around this level if we see a pullback there today. 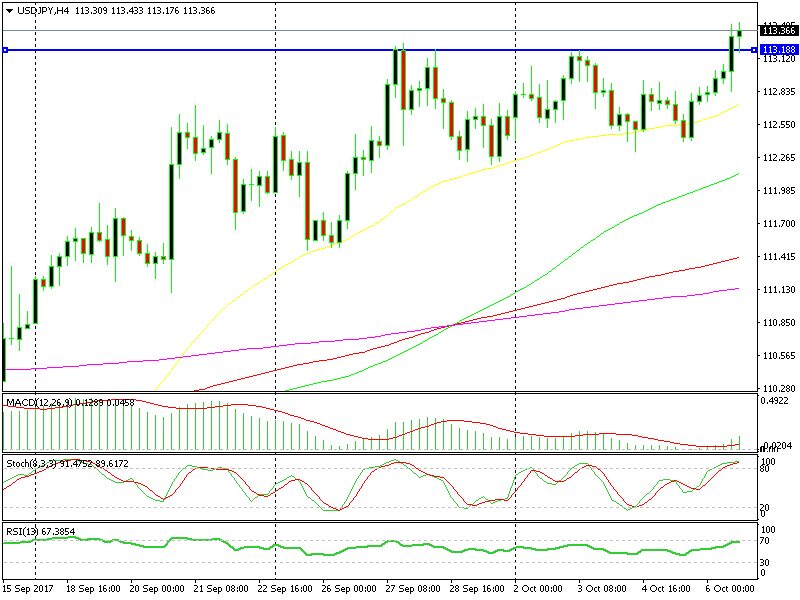 The resistance has turned into support now 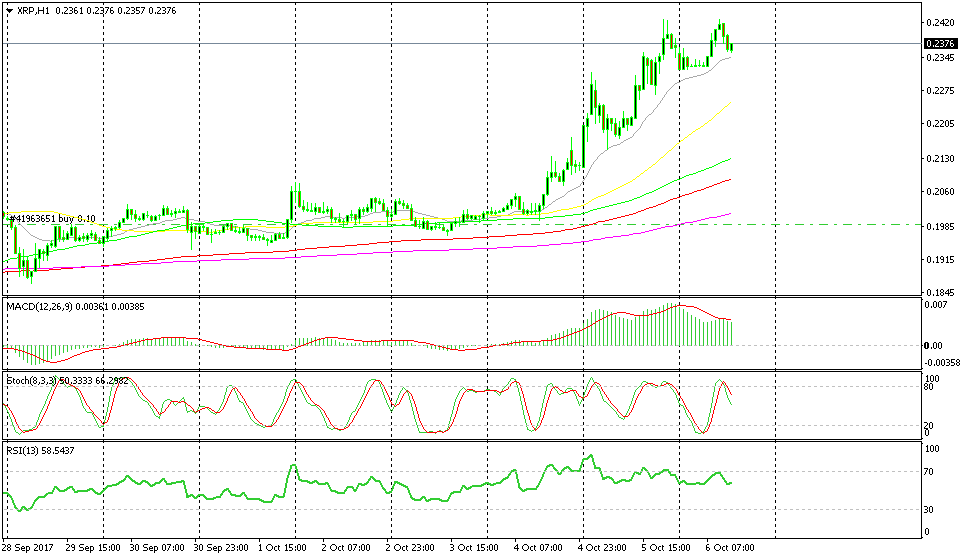 We're close to the 20 SMA again

I haven’t changed the reasons for going long on Ripple Coin (XRP), but I’m not going in just yet. As you can see from the hourly Ripple chart below, the price retracing lower and it is close to the 20 SMA. This moving average has provided support in the last few days and it is doing the same now.

But, stochastic is not oversold yet, which means that there is still some more room down. So, I’ll be waiting until the hourly chart becomes oversold before going long in Ripple.

Finally, there is some really decent US economic data which should be positive for the USD. Although, the negative non-farm employment change is stopping the buyers from pushing higher, but I expect the USD to remain upbeat after these numbers.