The FOMC minutes of the last meeting will be released this evening, so the market is in a wait-and-see mode. There’s some motion in the forex market but it’s mostly chaotic since forex traders are reluctant to take any position. One thing is clear though, the safe haven currencies are on demand as traders wait for the minutes. 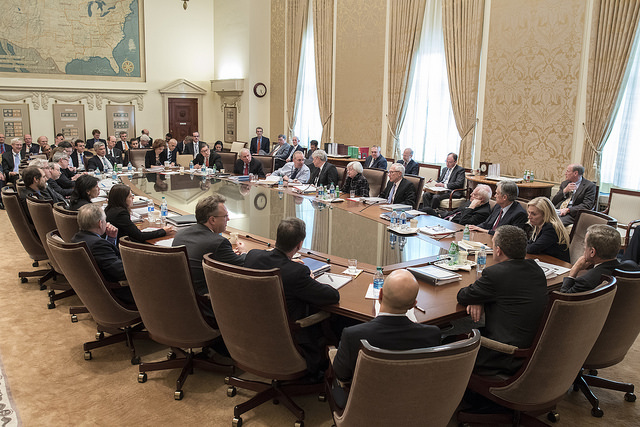 What did these guys talk about last time?

The UK Finance Minister Hammond is on a talking spree today. He is trying to put the ball in the EU court when the ball is clearly on the UK side of the field. Prime Minister May did the same thing a couple of days ago, which seems very immature.

Basically, the EU has been waiting for the UK to provide clarity from its side regarding Brexit. While now, the UK government is asking Europe to hurry up, trying to look ready for the job in from of the UK public.

Below are some of the comments from Hammond this morning:

“UK economy is robust but has clouds of uncertainty.”

“EU needs to engage and speed up the process.” (look who’s talking)

“UK should be prepared for a bad-tempered breakdown in Brexit talks.”

This last comment makes more sense than the previous ones. There is a real chance that the talks fail with the way this has been going and the way the UK officials have been dealing with Brexit after the referendum last year.

The Pound is not buying any of the bluffs the UK government is trying to sell as it continues to slide, while all other forex majors are up against the USD.

As it’s usually a custom when there is some important forex event coming up, the safe haven currencies find demand. Gold has been trading sideways mostly today, but the Yen and the Swiss have been finding some bids.

The Japanese Yen has also climbed higher today. USD/JPY claimed back most of yesterday’s losses overnight, but this morning it resumed the move down again.

This forex pair failed to break above the three moving averages on the hourly chart this morning and it headed down. Although, right now USD/JPY is at a decent level so we’re about to open a forex trade here, which is explained below. 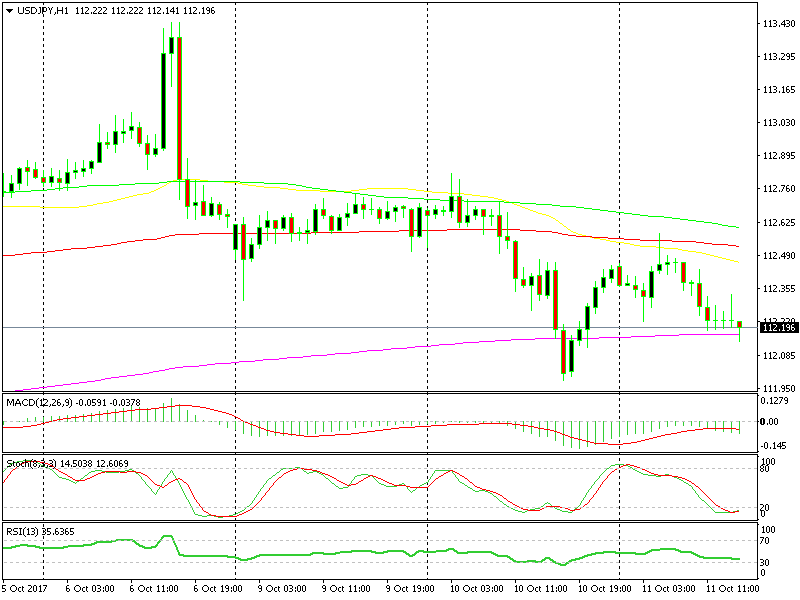 In the last few hours, USD/JPY has been finding strong support at the 200 SMA (purple) after coming down from the 100 SMA (red). The sellers don’t seem to have enough strength in them to push below the 200 SMA. So, the technical analysis is pointing up.

The fundamental analysis seems slightly bearish to me as well. JPY traders have sold this pair in the last couple of days, but the FOMC minutes are coming and these traders don’t want to be caught too far on the wrong side. So I think that the downside will be limited.

I don’t expect much activity in the forex market today until later in the evening. As my colleague Rowan mentioned quite early this morning (he’s based in Australia), we might see some position squaring right before the minutes are released. So, try to be cautious shortly before and after the event, although we’ll still be around till then.

Skerdian Meta // Lead Analyst
Skerdian Meta Lead Analyst. Skerdian is a professional Forex trader and a market analyst. He has been actively engaged in market analysis for the past 11 years. Before becoming our head analyst, Skerdian served as a trader and market analyst in Saxo Bank's local branch, Aksioner. Skerdian specialized in experimenting with developing models and hands-on trading. Skerdian has a masters degree in finance and investment.
Related Articles
Weekly Outlook, Jan 25 - 29, 2021: Top Economic Events to Watch This Week
The broad-based U.S. dollar is going to end this week on the bearish track as traders continue to cheer the Joe Biden administration's inaug
2 days ago