Kiwi Is Doing Hara-kiri After the New, New Zealand Government

The title above is not a lapsus, a new government will be formed any time now in New Zealand. The Labour Party apparently won the elections last week and the First Party which now comes at second or third place is backing the Labours together with the Greens.

Another woman will be the Prime Minister of New Zealand soon.

This should have had a positive impact on the Kiwi because it means stability, but for some reason, the New Zealand Dollar is getting beaten up in all fronts.

The technical picture looked pretty bearish for NZD/USD during the last few days. The price had formed a couple of dojis which point down after a few days of trading up, the stochastic indicator was overbought and the 100 SMA (red) was providing solid resistance. 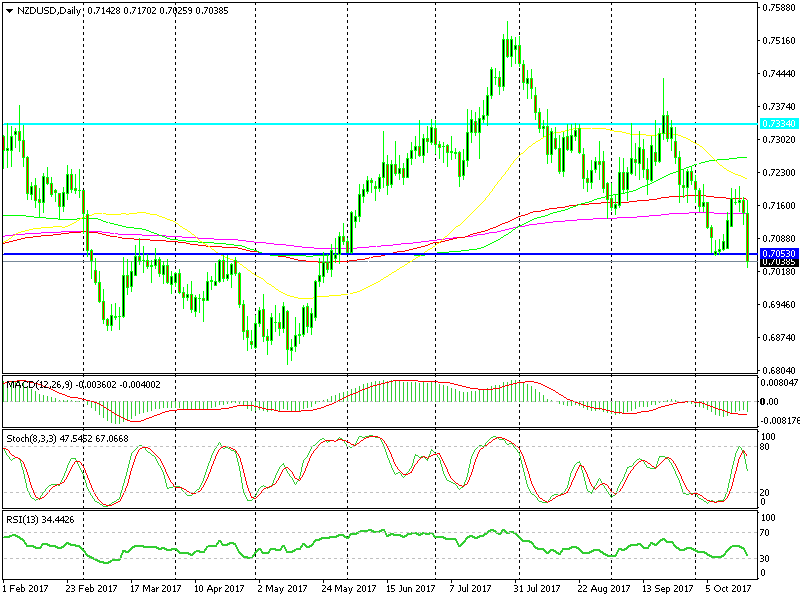 NZD/USD is doing the next bearish round today.

But no one thought that a new government would send the Kiwi crashing down. Anyway, this puts NZD/USD on a bearish slope so I will be waiting for retraces higher and then try to pick a selling spot.

The 0.7050-60 level is a big support level which will likely turn into resistance, but we’re still too close to that level. However, that’s the first level I will be looking at. If the buyers can’t push above it, then we know that the sellers are in control and will probably open a sell forex signal around there.