NZD/USD Is Giving Us A Hard Time, but the Signal Still Looks Good - Forex News by FX Leaders

NZD/USD Is Giving Us A Hard Time, but the Signal Still Looks Good

Earlier today we opened a sell forex signal in NZD/USD. It was a good chart setup for sellers as this forex pair had been in a steep downtrend last week, while this morning it was retracing higher.

The retrace reached its peak in the London session as the stochastic indicator became overbought. At the same time, the price hit the 50 SMA (yellow), and it failed to break it. That meant that the buyers were giving up.

The pin candlestick close to the moving average was another bearish signal. Pins, dojis, and morning stars are reversing signals if you know how to read candlesticks. If you don’t, have a read at our candlestick trading strategies.

It didn’t last long and this forex pair turned down, but the price missed our take profit by a few pips. Since then, NZD/USD has traded sideways in a very tight range. 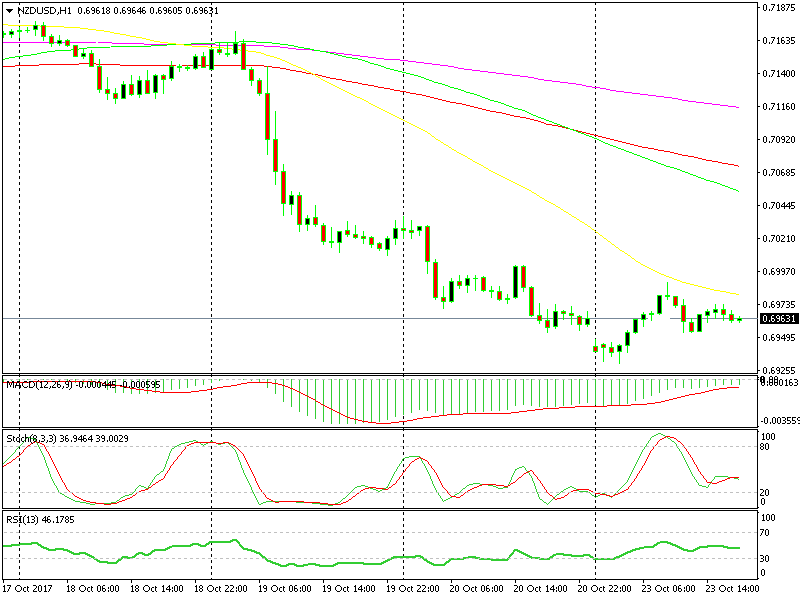 The 50 SMA is proving to be a strong resistance indicator.

That would be sort of worrying for sellers, but considering that other forex majors have gained around 30 pips against the Buck while this pair has remained mostly unchanged, the picture doesn’t look too bad. Once the Dollar starts gaining against other majors currencies, chances are that NZD/USD would be the one to fall the hardest.