Forex Signals US Session Brief, OCT 27 – The US Economy Marches on and So Does the USD - Forex News by FX Leaders

Forex Signals US Session Brief, OCT 27 – The US Economy Marches on and So Does the USD

The US economy is heating up.

The US GDP report was released a while ago. Expectations were for a reading of 2.6%, but the actual number came much higher at 3%. This is the second quarter with a 3% growth, considering that the US economy grew by 3.1% in the second quarter, as revised higher from 2.6%.

At worst, this was going to be a neutral report due to the hurricane season. If the numbers disappointed, then it would be blamed on the hurricanes, and the damage they have caused this quarter. But the actual numbers beat expectations despite all the distraction in Texas during September, and it might be revised higher as well after the second and third calculations.

The USD has found some bids, although the climb is not as strong as I would have expected. NZD/USD is sliding lower as I speak which goes in the same direction as our sell forex signal here, but we still have quite some area to cover until the price reaches the take profit level.

EUR/USD has been climbing nonstop throughout this year, although, yesterday the situation changed for the single currency. The ECB finally announced yesterday that they will cut the monthly bond purchases in half, starting from January. So, the event everyone was waiting for finally happened yesterday and the market has no more incentives to buy Euros now.

EUR/USD lost nearly 200 pips yesterday because of that. Now, this pair is declining again but the fall is coming from the USD side this time. The GDP numbers were great and the details were quite good, too. The price index rose to 2.2% from 1.7% expected, while personal consumption beat expectations as well.

Today’s US GDP report is another reason for the FED to keep hiking interest rates and inflation is picking up as well as details show. So, there’s only one direction for this forex pair right now. 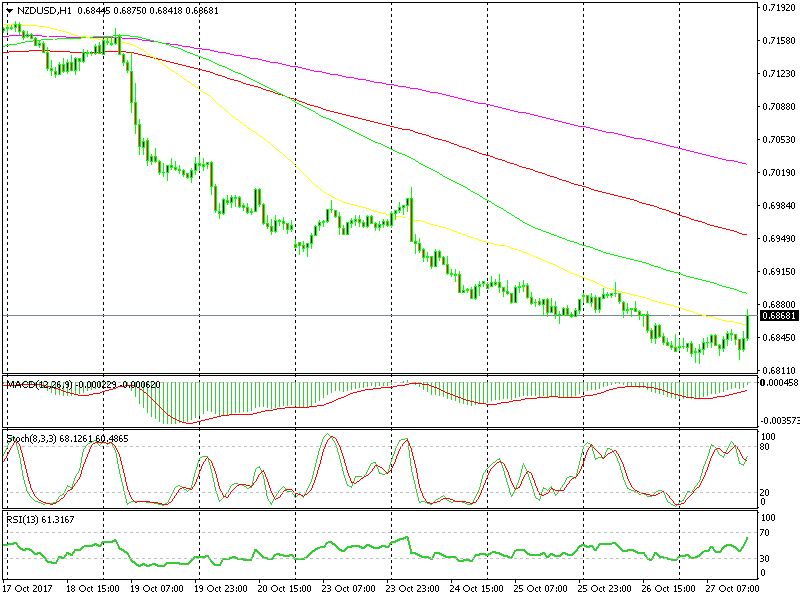 The price has moved above the 50 SMA, but hopefully, the hourly candlestick will close below it.

The 0.7730 area is also a long-term support and resistance level.

As we mentioned in one of our forex updates today, NZD/USD has been on a slippery slope in the last several days. We hold a bearish view in this pair for the above reasons, so we have a sell forex signal here. The 50 SMA above here offers another reassurance for sellers.

The Catalonian Parliament is about to vote on independence shortly, so things are getting interesting. This is another negative event for the Euro, especially if they do vote pro-independence. We’re just closing our long-term sell forex signal in this pair just in case they vote against which would give the Euro a boost. If that happens, we will look to sell again higher.