Forex Signals US Session Brief, OCT 31 – The Risk Is On Again as Stocks and USD Rebound - Forex News by FX Leaders

Forex Signals US Session Brief, OCT 31 – The Risk Is On Again as Stocks and USD Rebound

Yesterday was a risk aversion day in the financial markets and some events in the US helped build this sort of market sentiment. Today it seems that the situation has changed, and we have been taking advantage of it. Gold has turned lower, while stock markets and the USD have been moving higher. 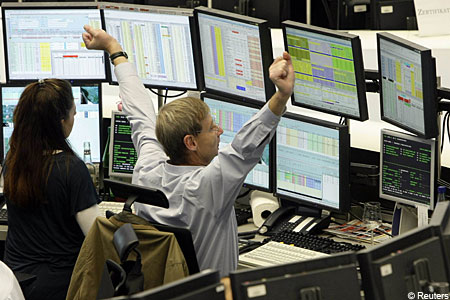 Every trader is happy when stocks bounce.

The stock markets around the globe have been trading in a bullish trend for nearly a decade after the 2008 crash following the financial crisis, and they don’t seem to be stopping anytime soon. Although, there have been periods when retraces have been deep like when the Chinese stock market crashed in August 2015.

So, when S&P and, particularly, Nikkei started diving hard yesterday after the slow retrace lower, the first thing that comes to mind is another market crash or at least a substantial retrace lower. We had two buy signals in Nikkei and S&P, so we were getting worried.

But the decline stopped, so this morning I was quite happy to see stock market back on their feet. Nikkei is now around the 20100 level. So after Nikkei resumed the uptrend, our signal hit take profit, which made us a handful of pips.

The S&P signal is still live, but it looks a lot better now than it did yesterday. The price is just above breakeven, and the H4 chart is heading up after being oversold, so we’re on the right track here.

The USD Is Making A Comeback in Forex

As we mentioned yesterday, the forex market was in a risk aversion mode yesterday, so the USD was retracing lower in the morning. But, the report about the tax plan and the rumors that Powell might take office raised some eyebrows, and the retrace turned into a proper USD selloff.

That didn’t last long, and the USD started reversing higher in the first hours of the morning. The USD has gained considerable ground against commodity currencies, particularly against the Kiwi and the Aussie. So, we closed our sell NZD/USD signal in profit earlier on.

The USD is also making decent gains against the Japanese Yen, even though the Bank of Japan remained on hold. There were a few dovish remarks on Kuroda’s speech, but the market totally ignored them.

The best place to see the market sentiment though is Gold. Yesterday, Gold made some impressive gains against the USD as risk aversion sentiment prevailed in the financial markets. Today that sentiment leans a bit more on the positive side – Gold is losing ground quickly. We opened a sell signal here a while ago which is in profit as I speak. 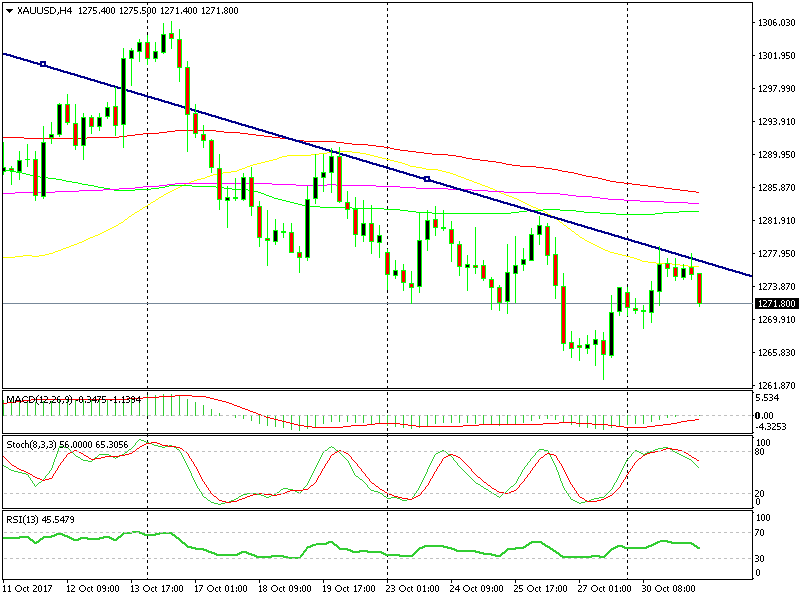 The downtrend is resuming again in Gold.

We based the Gold signal on the H4 chart as we have done with the other few Gold signals recently. Gold has been trading in a bearish trend on this timeframe chart as the trend line shows. The 50 SMA is also scaring the buyers, so Gold seems to be heading down.

The general feeling in the markets today is a lot more positive than what we saw yesterday. We usually thrive in such market conditions and have made quite a few pips today. By the way, USD/CAD is surging higher right now, so I suppose the Canadian GDP report which should have been released must have sucked. Although, I will post an update about this soon.