Trying Another NZD/USD Long Position with Another Short Term Signal

Yesterday we went long on NZD/USD for the first time in a while. We have been short on this forex pair as well as on AUD/USD since the commodity currencies have been feeling vulnerable during the last two months.

But, I think that commodity Dollars have reached a limit on the downside for the time being and they are in a retracement period now. The Aussie had some bad luck this morning as the Australian retail sales remained flat, which sent AUD/USD lower again, but overall these currencies are making a pullback, perhaps before the next push lower.

So, we decided to switch to longs until the retrace up is over. Our buy forex signal in NZD/USD went pretty well yesterday. Today we decided to open another buy signal here. 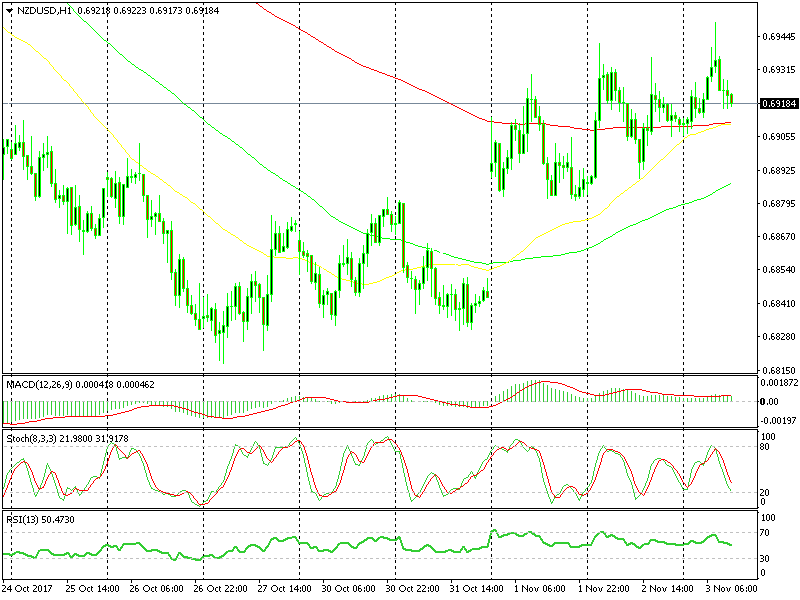 As you can see from the chart above, this forex pair opened with a 50 pip gap above on Thursday and since then the price has moved higher in waves. Early this morning we saw the next push higher, while now the price is retracing lower on the H1 chart.

The price has reached a number of moving averages, particularly the 50 SMA (yellow) and 100 SMA (red) which are providing support at the moment. The last two hourly candlesticks also closed as dojis, which are reversing signals after the current pullback lower.

The stochastic indicator is almost oversold and from the recent history, we can see that the price has reversed higher every time stochastic reached these levels. So, all these technical indicators are pointing up and that’s why we went long too.