Another Moving Average Has Come to Our Rescue in NZD/USD

Yesterday we opened a sell signal for NZD/USD. In fact, we opened a few forex signals such as an AUD/USD sell signal and a USD/JPY buy signal. The Yen has been getting some strong bids during the night. As a result, USD/JPY is diving, so our buy signal got smoked, but our AUID/USD signal hit TP after the Australian wage inflation missed expectations. 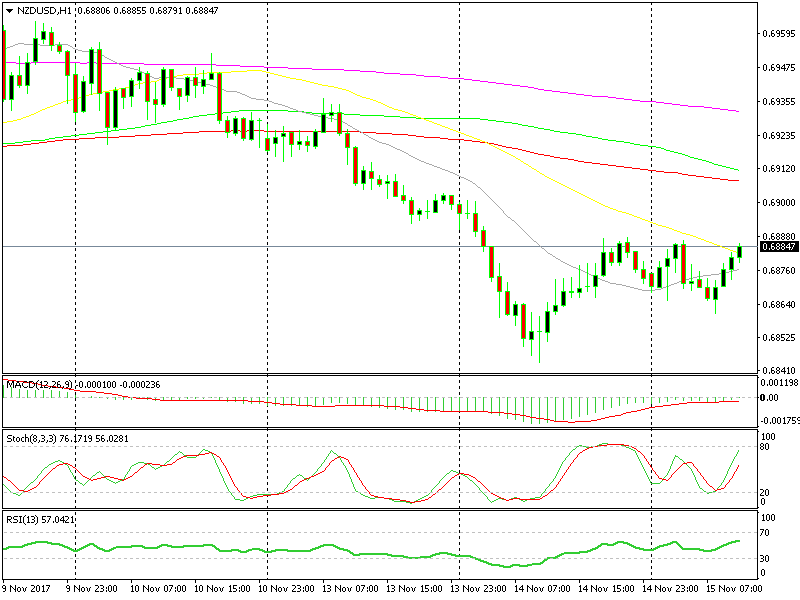 The 50 SMA has caught up now, and it is providing resistance.

We opened this NZD/USD signal yesterday, and we based our technical analysis on the H1 forex chart. According to the chart, the 20 SMA (grey) was providing resistance on the H1 NZD/USD chart; the stochastic indicator was overbought and the price was forming several doji candlesticks which are reversing signals after an uptrend or a retrace.

The USD had some tough times yesterday, and NZD/USD climbed a bit higher. Although you can sense the vulnerability in this pair since it only climbed a handful of pips, while other majors such as the Euro and the JPY climbed nearly 100 pips against the Buck.

This morning, we are still above the 20 SMA, but another moving average is providing resistance. The 50 SMA (yellow) has caught up with the price. Stochastic is sort of overbought again, so it looks like another bearish chart setup has formed today, this time with a stronger moving average, so let’s see if this chart setup will work out.