Who’s Going Short on the Aussie?

The NZD/USD signal just reached SL as the Kiwi keeps climbing for no apparent reason. The NZD has been one of the weakest currencies recently, but yesterday it found some heavy bids out of nowhere, so it has shown resilience in the last few trading sessions.

The Aussie, on the other hand, has been pretty vulnerable. The first sign of weakness came yesterday in the afternoon when AUD/USD reversed back down about 50 pips lower – at a time when the forex market was pretty quiet.

It then completed another leg down during the night in the Asian trading session after the disappointing earnings numbers from Australia. The Aussie is the weakest link today which is why we decided to go short on this forex pair. 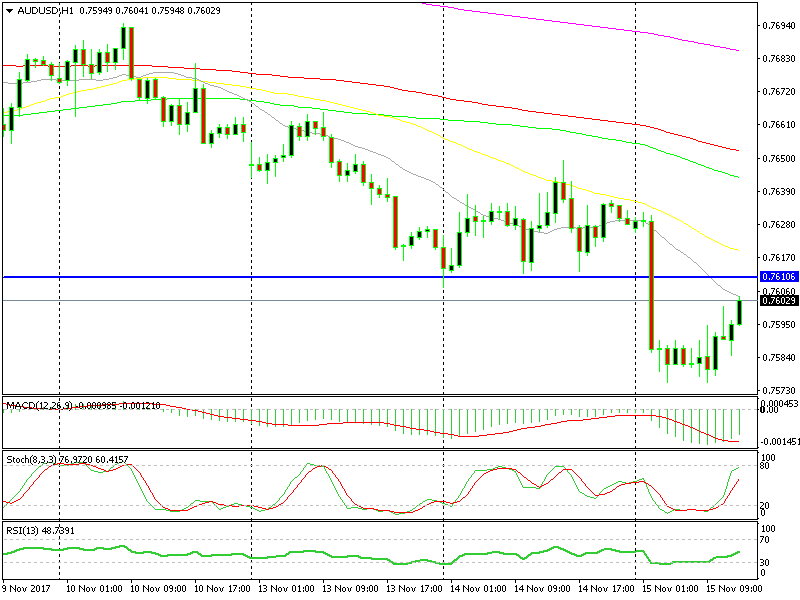 The previous support is likely to turn into resistance.

As you can see from the H1 chart above, AUD/USD lost about 60 pips early this morning while now it is climbing higher in an attempt to form a retrace. The retrace seems to be over now that the stochastic indicator is overbought.

Besides that, the price has touched the 20 SMA (grey) which is providing resistance on top. The main reason that we went short is the fact that the AUD has been feeling pretty weak recently. Now that the pair is overbought, the sellers are likely to return.