It is not out of the ordinary for the Swissie to fall into a range bound pattern for an extended period of time. Over the last four sessions that is exactly what has happened, with shrinking ranges becoming the rule for the USD/CHF.

For now, we are awaiting a fundamental reason for this market to take off directionally. Key players of the ECB issued several comments earlier today but did not bring much participation to the Swissie. However, amid concerns over Germany and the long-term prospects of the Euro, we have seen some action moving valuations closer to par.

If you have followed any of my updates since August, you will remember that I am a big fan of long-term or “macro” Fibonacci retracement levels. When they are nearby, price is very susceptible to their influence. 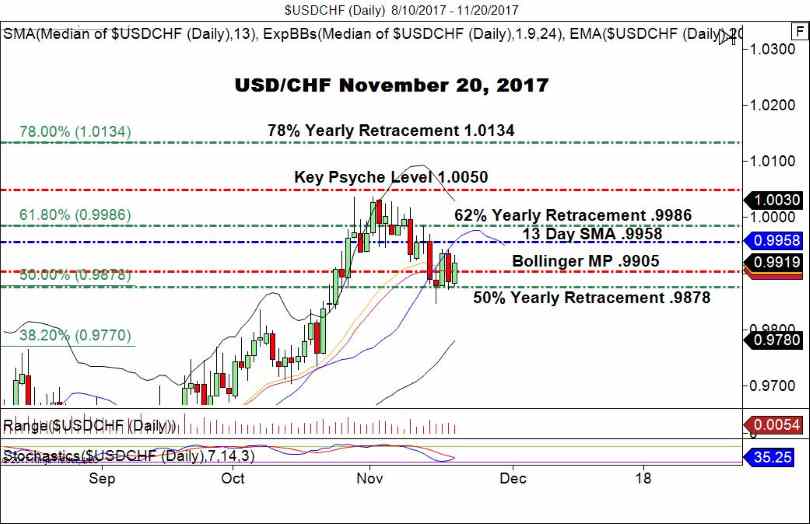 Perhaps the most striking aspect of the daily chart is the reaction of price to the 50% retracement level of .9878. It has proved to be valid support, holding the market in check. If this continues, we will have a great chance to play a rotational scalping strategy.

The key technical levels for the remainder of the U.S. session:

Bottom Line: With this market stuck in rotation, I will be fading any pronounced extremes back towards the .9900-.9925 area of fair value. Shorts from the Daily SMA at .9958 with an initial stop above .9975 will give an opportunity to capitalize on this idea.

In coming sessions, a short from .9986 with an initial stop above .9925 will serve as a possible position trade. Stay tuned for a detailed plan facing this level in the event that it comes into play.