Preparing to Short AUD/USD at the 50 SMA after Lowe

AUD/USD has just made a jump higher which currently accounts for around 40 pips. This is the first jump in the last two weeks for this forex pair, so we’re thinking of trading it with a short-term forex signal. 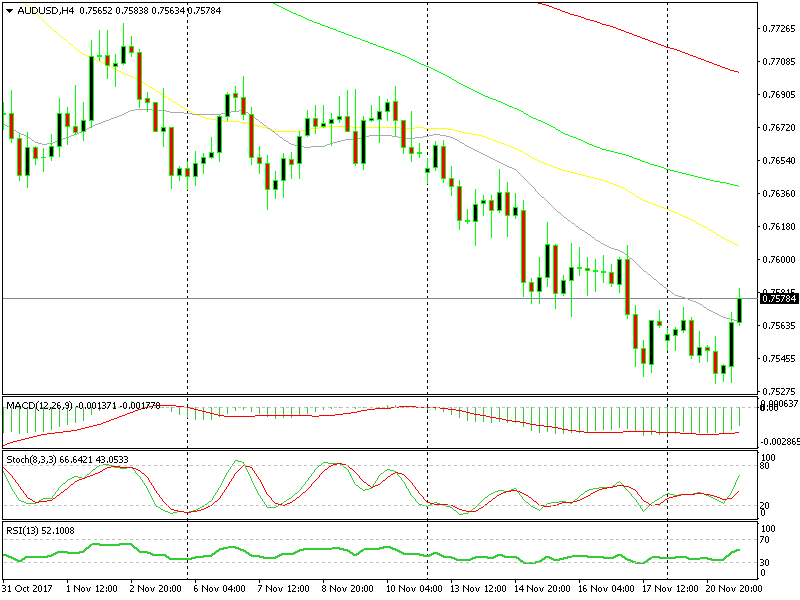 The Governor of the Reserve Bank of Australia, Philip Lowe, was speaking a few minutes ago, and the market took his words with a bullish attitude. I suppose forex traders were geared up for some dovish remarks considering the downtrend in this forex pair lately.

He said that “there’s no need for a near-term change in the interest rates. If anything, it is more likely that the rates go up rather than down.” These were more or less his words, which do sound sort of hawkish.

This took the AUD pairs higher, and AUD/USD is more than 40 pips higher now. As you can see from the H4 forex chart below, buyers have taken out the 20 SMA (grey) which provided strong resistance during last week.

I was thinking of trying a forex trade shorting this forex pair at the 20 SMA, but the USD is being sold off at the moment, so the situation is a bit dangerous for sellers right now.

I will look how the price reacts at the 50 SMA (yellow) now that the 20 SMA is gone. That moving average is about 30 pips higher and by the time we get there the H4 chart will be overbought, so the situation will be much better for sellers. Be ready.