Cryptocurrencies have entered the next phase of the long-term uptrend. They went through a consolidation period during most of September and in October, but in the last few weeks, we are seeing them charge ahead once again.

Bitcoin has been surging since the massive dive in the second week of this month and the other cryptos have joined it. Dash and Litecoin are more than 10% higher since the beginning of the month.

But, the best performers today are Ethereum and Litecoin. They both dropped around $30 lower earlier today, but the climbed higher just as quickly. 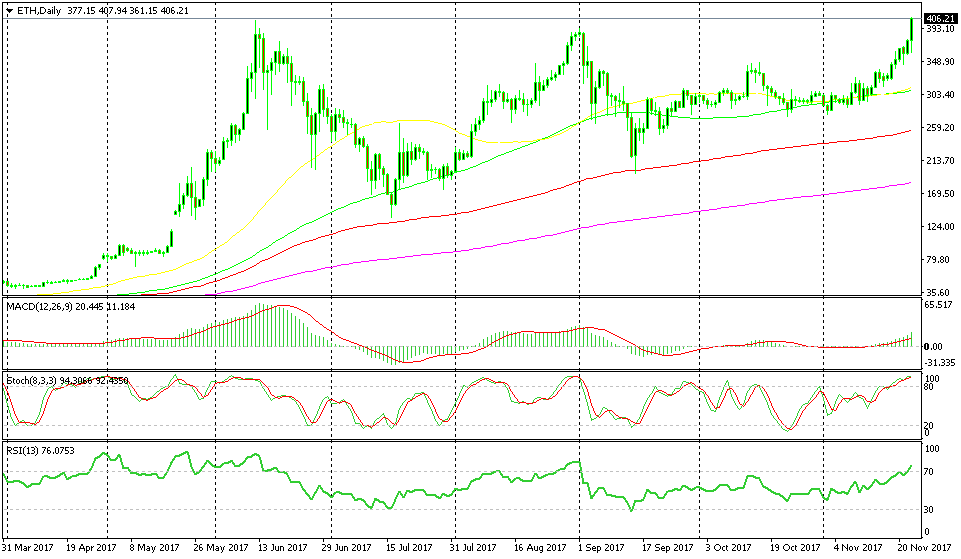 Now, Ethereum is above $400 and for a brief moment, it broke above the all-time high, reaching as high as $406 on my broker’s platform. The all-time high was at $404.50. It’s not considered broken since the price quickly slipped back below.

Well, blimey me. Ethereum has just covered another yard north as I was typing this cryptocurrency update and is now trading at $407. Wait, we’re at $408 now. So, the all-time high resistance at $404.50 is now broken.

Now, that level should act as support according to forex textbooks, but the moves are huge, so if I see a retrace lower, I will wait for a better level lower, probably at $350-60, hopefully, those two moving averages catch up by then.