Bitcoin has been climbing higher all the year and while you expect the rally to slow down, it keeps gaining pace as it pushes ever higher. Today was the big day for Bitcoin. Yesterday it crept closer to the $10,000 level but the buyers couldn’t make the final move.

Today, Bitcoin broke that level in the early hours of the morning and about an hour ago it broke above $11,000 as well. That’s amazing but it is not the end of the rally. As we said, the rally is only getting stronger the higher Bitcoin pushes.

The Bank of England (BOE) commented earlier on that Bitcoin is too small to threaten the world economy. Well, it is getting bigger by the day, isn’t it? Some analysts are calling for $4,000 soon, others see Bitcoin at $10,000 in a year. In the other hand, the Vanguard founder is predicting a Bitcoin crash.

However, Bitcoin is above $11,000 at the moment and the other cryptocurrencies are benefiting from this rally as well. Ethereum is flirting with the $500 level which is a record for this digital currency. It used to trade around $5 a year ago, so the gains so far are close to 10,000%. 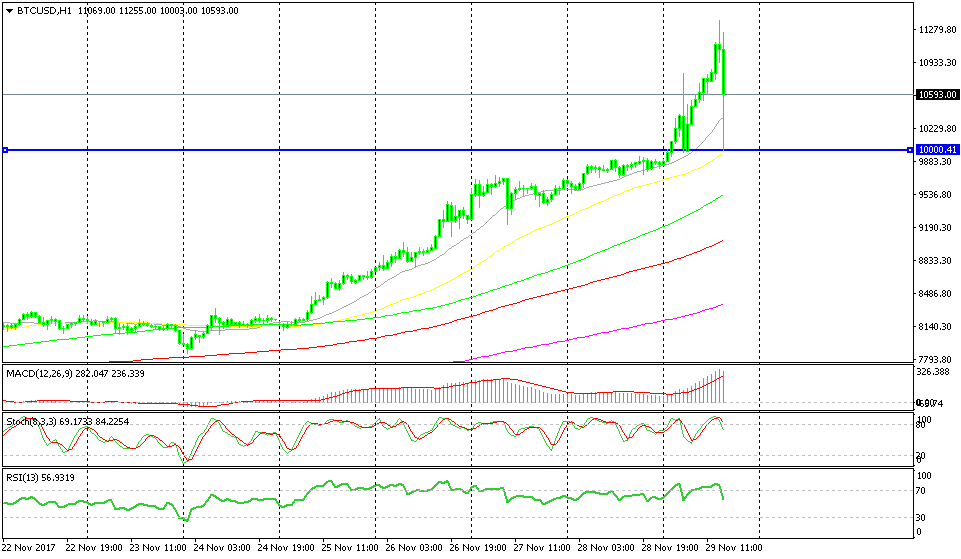 The $10,000 level worked perfectly, but this time as support

Dash coin has also made a remarkable jump in the last few hours. It gained more than $100 during this time, which means a 20% gain in a few hours. This is getting scary; I have this feeling that we will witness a crash pretty soon. That would be a good opportunity to get in on this rally on the long side, but the crash not coming.

We’re waiting though and I have my eye on the $10,000 level in Bitcoin. It was a massive level which didn’t provide too much resistance, but the uptrend has been crazy so there was no chance that this level survived, that’s why we didn’t open a sell signal down there.

That said, I now expect the buyers to see the $10,000 level as the perfect buying spot. So, I’m watching the Bitcoin chart closely in order to get a good forex trade here.

Big Update: Bitcoin just flash crashed and it stopped exactly at the $10,000 level where we predicted. The 50 SMA (yellow) was standing right there too, providing support. Now Bitcoin is back 60 pips higher so we missed that opportunity, but it happened too fast. I wonder if my broker would have filled the order. Waiting for another opportunity.