EUR/CHF – A New Trade at An Old Level

Having been left without live signals, we decided to try the upside on the EUR/CHF again. This forex pair has been trading in an uptrend since April, so the right way to trade this pair is to buy the dips. That’s what we have been trying to do with it and today we opened the second buy forex signal here. 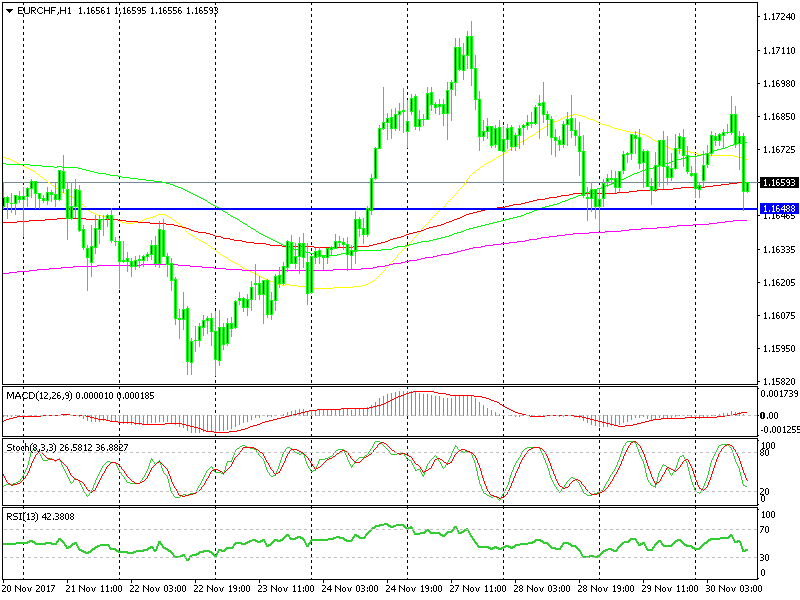 Back at this support level again

The EU inflation report came out mixed, but to me, it leans a bit on the dovish side. The annualized main CPI (consumer price index) number came at 1.5% against 1.6% expected, but higher than last month which stood at 1.4%.

The Euro lost about 20 pips right after the release which sent EUR/CHF lower as well. It took this pair to the level where we opened yesterday’s signal, so why not give it another try today?

The 1.1650 area has been acting as support and the 100 SMA (red) has helped contain the dips on the hourly forex chart. The stochastic indicator is oversold as well, which means that the hourly chart is now oversold and a reverse higher is due.

Besides that, if you switch to the H4 chart you can see that the 50 SMA has been providing solid support all week and the 100 SMA is standing just below there. So, the downside seems protected in this timeframe chart as well.