The Euro and the Canadian Dollar have been sliding down a slippery slope over the last several days. The decline continued further today. The US Dollar had some effect on this as well as it keeps progressing higher.

Bearish CAD Before the OPEC Meeting

The OPEC meeting has already started and Saudi Arabia is pushing that all members implement an output cut extension. Saudis and UAE want a 9-month extension while Kuwait says they can push it until the end of next year but wants everyone to join.

The Saudis also said that it is “premature to talk about the exit strategy” and that “the exit will be gradual”. This sound to me like a central banker talking about interest rates. OPEC has implemented the sort of rhetoric that the central banks use.

The Canadian Dollar is not getting positive vibes from these comments, despite the extension that is almost a done deal. USD/CAD continues its uptrend, although in the last hour it seems like it wants to pull back lower. I’m thinking of buying this forex pair, but I will explain this trade in the trade ideas section below.

As we mentioned in the previous forex update, the inflation report from the Eurozone was a bit of a mixed bag. It wasn’t particularly bad, but it didn’t give the European Central Bank a reason to become more hawkish.

Core CPI (consumer price index) came out as expected while the main CPI number ticked up a point. Although, both of these numbers missed expectation by 0.1%.

The Euro has been sliding lower all morning and it lost 20-30 pips after the release. Yet, the 50 SMA (yellow) is still holding strong despite being pierced for a brief moment. This moving average has been providing solid support throughout this week, so the sellers must take it out if they are to push further down.

The US Dollar has found some demand this week after the rough times it suffered last week. Yesterday’s positive US GDP report gave the USD another boost, but it didn’t stretch very far. I was expecting the USD to gain at least 100 pips by now, but the gains have been limited so far in most major forex pairs, so this price action is not pointing to massive gains yet.

EUR/USD still can’t break the support at 1.1800-20, while GBP/USD is climbing higher instead. The decline of the Cad and NZD against the Buck is connected to the weakness in these two currencies, rather than plain USD strength.

Though the US Dollar is making some gains, it still feels pretty weak to me. US Unemployment claims are up next, but I doubt they will change much in the forex market because the surprise factor has left this piece of data. Unemployment claims have been around these levels for many months and they’re not expected to deviate much today. 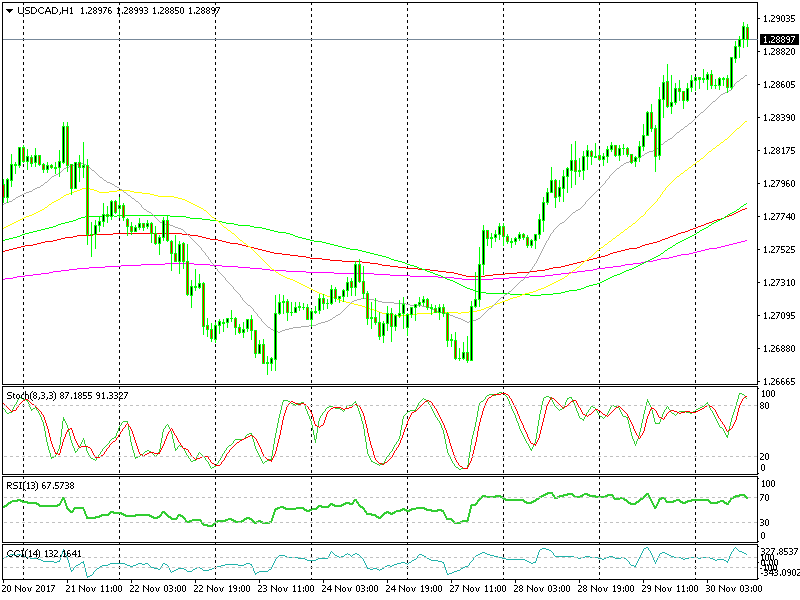 Pick your level to buy USD/CAD

We are not buying USD/CAD right now, but as I mentioned above, I am thinking of opening a buy forex signal if this pair retraces lower. OPEC is not helping the CAD and the uptrend is pretty strong, so any dip is a good opportunity to go long.

As you can see from the hourly forex chart above, there are two levels where we might go long. The first level comes at 1.2870 where we can find the 20 SMA (grey) which has been holding the uptrend in place this week. The second level comes at a previous support which coincides with the 50 SMA (yellow) at the moment. We will decide where to buy as the price retraces lower if that happens.

The US unemployment claims are the biggest economic event today. Although, I suggest that you watch the subcomponents of this report, particularly the personal spending, personal income and price index because they will have the biggest impact on the market.