Key Levels For The USD/CHF - Forex News by FX Leaders

Key Levels For The USD/CHF

During the overnight, Swiss Retail Sales disappointed badly, coming in at -3.0%. This news caused a test of topside resistance against the USD. Since then, it has been a return to fair value, with the USD/CHF trading off of daily highs at .9847.

Today’s news cycle has certainly brought robust activity to this market, along with whipsaw conditions. We are seeing a recurring theme across the majors for the first half of the U.S. session: heavy participation and erratic price action.

On the daily timeframe, it appears that the USD/CHF is settling into the “L” formation. 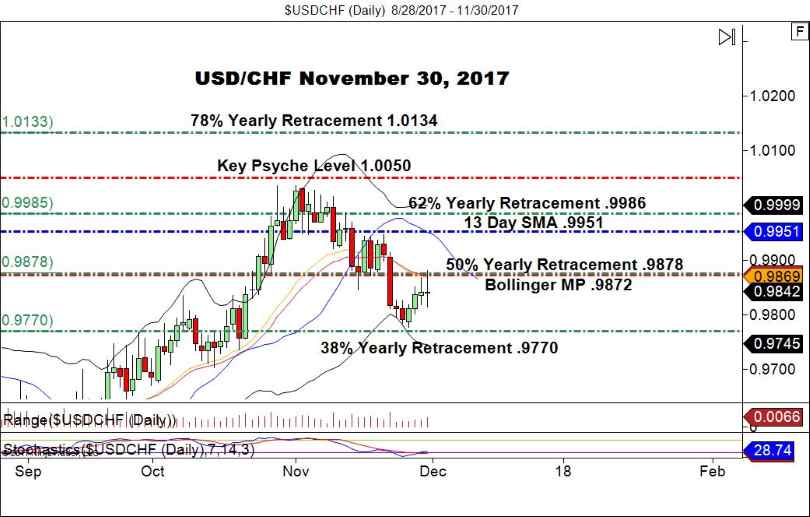 After a pronounced drop during November, the USD/CHF is testing a previously valid level at the 50% yearly retracement (.9878). This level proved to be important support a few weeks back and it looks to once again act as a catalyst for participation.

Bottom Line: The proximity of four different resistance levels gives one confidence in their potential effectiveness as a market entry point. With today’s session high of .9881, they have proven formidable. The area between .9869 and .9878 will be important moving forward and may be a viable scalping area for tomorrow’s session.

The Swissie has a tendency to settle into rotation for extended periods, but tomorrow’s release of U.S. ISM PMI may jolt price from current levels. In the event that it does, some solid trade setups may come into play for the second half of tomorrow’s session.