In November and in early December we had quite a few forex signals on EUR/CHF, most of which were buy signals. Recently though, we haven’t had a chance to get in on the long side but we spotted a good opportunity today. So, we decided to take that opportunity. Let’s see the chart setup behind this trade. 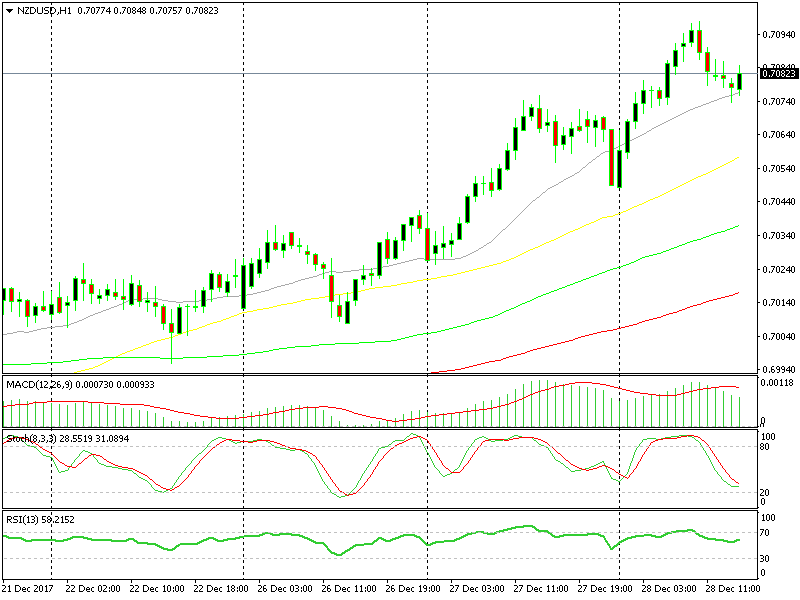 This is a bullish chart setup, technically

As you can see from the hourly chart above, NZD/USD has been in an uptrend for a few weeks. But, the trend has picked up the pace in the last several days, which shows that the buying pressure is increasing. It won’t last forever, but at the moment the pressure is strong on the upside.

In the last few hours though, this forex pair has been going through a retracement period. The last several hourly candlesticks are all red and the stochastic indicator has reached the oversold area. That’s a sign that the retrace is complete.

The 20 SMA (grey) is also doing a good job in providing support on this pullback. It has been pierced previously but the price has resumed the uptrend and moved above it again many times before. This time, the sellers couldn’t even push the price below the 20 SMA.

Another bullish technical indicator is the previous hourly candlestick. It closed as a pin after a retrace. We know what that means; it means that the uptrend is about to resume since this sort of candlestick is a reversing sign. Now the reverse ha started and the current candlestick looks bullish. Now let’s see how it will close. So, these are all bullish indicators, hence our buy fx signal a while ago.

Good Time to Buy US WTI Crude Oil, As It Bounces Off the 100 SMA After Last Week's Retreat?
1 week ago