EUR/USD Completes the Retrace on the H1 Chart

The Euro has been in the lead during the latest USD battering, but in the last few hours EUR/USD has been going through a correction period. Now, the price has reached an important level, so we have to make a decision.

The retrace we have been waiting for has happened. The price is around 50 pips lower from the top, which came to 1.2080. That’s pretty close to the 1.21 level, which is the line in the sand for this forex pair. It provided resistance last year, and I highlighted a trade idea in the first morning update today.

That trade idea implied that we sell EUR/USD close to 1.21. A rejection was due in the first attempt and that’s what happened, even though we didn’t quite reach that level. We didn’t take that trade because we were waiting on a better price, but I hope some of you have used the trade idea anyway.

We are back lower now and it seems like the retrace might be over. The stochastic indicator is almost oversold; every time this indicator got close to being oversold, the price reversed back up and the uptrend resumed. 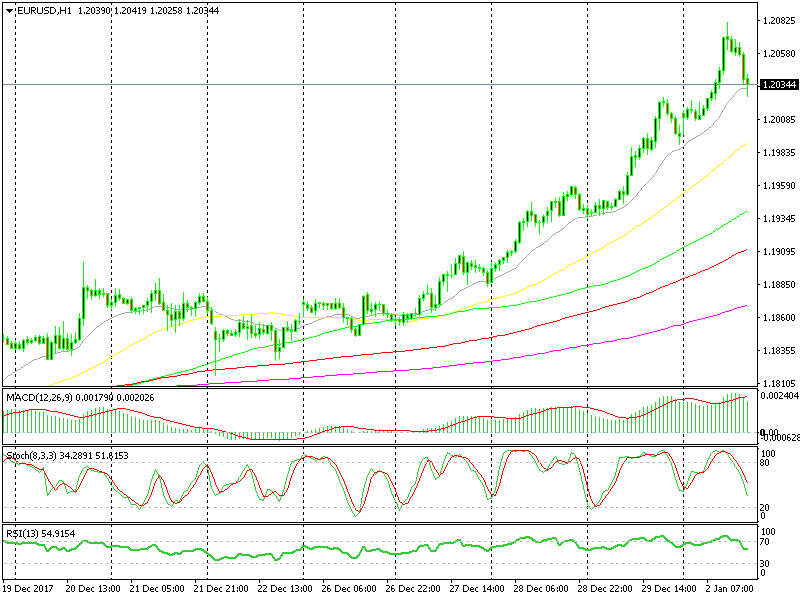 If the hourly candlestick closes as it is, that will be a bullish sign

Another bullish indicator is the 20 SMA (grey). It has provided solid support all week last week, so the chances are that it will provide support again. It looks as though it is providing support now, because the price is trading around that moving average at the moment, and the decline seems to have stopped.

I am not sure that we will take this trade; we have two forex signals live right now, both of which are against the USD. Therefore, it will be three USD sell signals if we take this opportunity now, which will leave us too exposed to a USD jump.