The Dollar closed last week heading down once again. We have seen the USD become negative and head down for no real reason quite often last year, and that’s how it closed again this year.

It hasn’t started the new year on the right foot, either. This morning, the USD is sliding again against all major currencies. Commodity Dollars are advancing after they completed a retrace late in the afternoon last Friday.

The Yen is making the most of the USD’s weakness; USD/JPY is about 50 pips lower from the top last night. This forex pair looks like it’s heading for an important level on the daily chart, but we will take a look at it on the next forex updates. 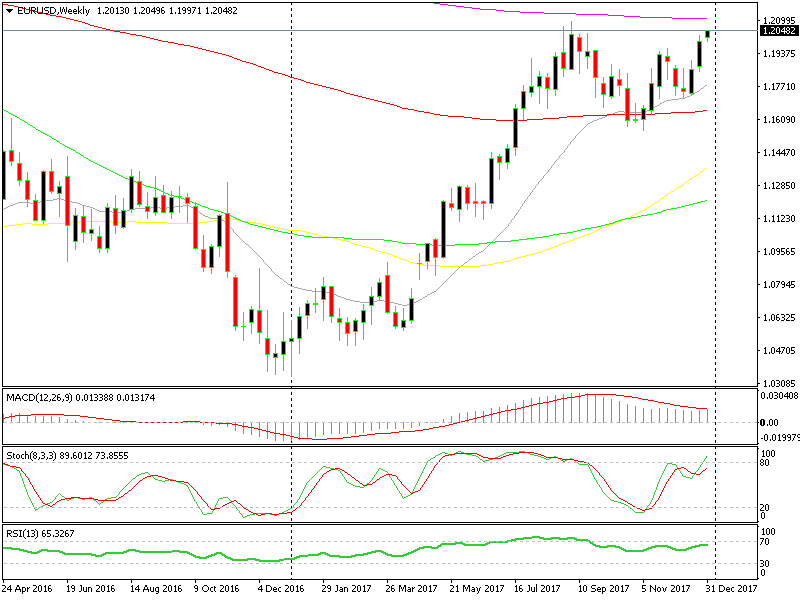 EUR/USD is climbing again with the GBP, which is heading for a big level itself. Looking at the weekly chart, we see that the 1.21 level was the top last year. It has been the highest price this pair has reached in the last three years and it is a big resistance level for the bulls to target.

The 200 SMA (purple) also stands right there at the moment, so that will be another indicator to provide solid resistance up there. We’re about 50 pips away but that’s not much nowadays.

How to trade it

When the price gets close to 1.21, I will look to open a short term forex signal. I think that we might see a rejection at first, which could give us a handful of pips.