Impressive Numbers from Canada Push USD/CAD off the Cliff

Both of the employment reports that were talked about in the midday brief were published, and it turns out thart they went in the opposite direction. The US employment report disappointed slightly, while the Canadian report was pretty impressive.

Looking at the US ADP non-farm employment report, released on Wednesday, the idea was presented that today’s main US employment report would be positive. Average earnings ticked higher by a decimal point, however, new jobs this month were at a whopping 100k lower than the previous one, which, in turn, sent the buck tumbling down.

The main reason for the dive in USD/CAD was the Canadian employment report. New jobs increased by around 80k , although expectations were for a 2k increase. The unemployment rate was expected to increase from 5.9% to 6%, and declined in the end to 5.7%.

Finally, the improvement in the Canadian economy is spilling into the general economy, and, judging by the numbers, people are beginning to notice. New jobs are increasing, and so are the wages. 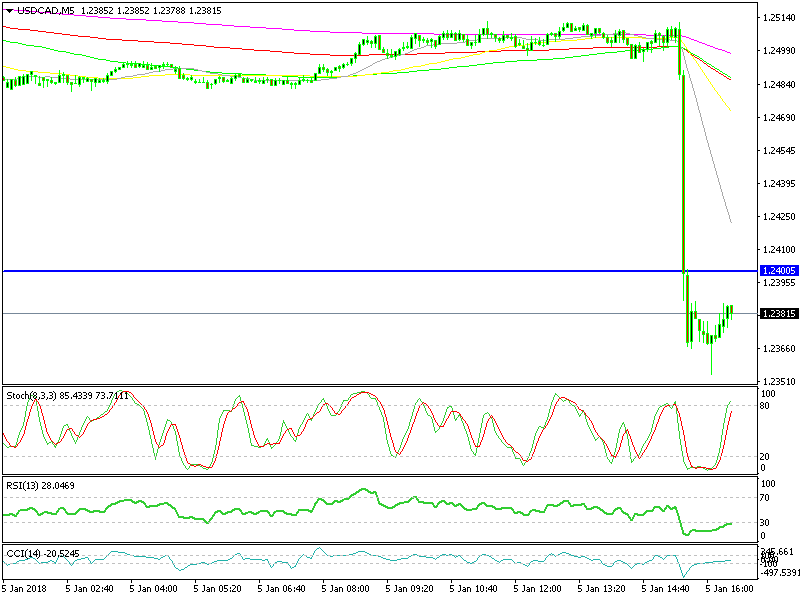 The 20 SMA (grey) should provide enough resistance for seller

Rate hikes odds jumped higher immediately after the release of the Canadian employment data, from around 45% to nearly 70%. The bank of Canada (BOC) is meeting in less than two weeks, so the market is currently making its move. The USD/CAD lost more than 150 pips, but is slowly climbing higher once again. The end of the climb would present a great opportunity to sell this pair.