The UK CPI (consumer price index) report will be released soon. Being that this is one of the most important economic reports for the BOE (Bank of England), an eye should definitely be kept on the GBP/USD, and the GBP in general.

Yesterday, we opened a sell forex signal on the EUR/GBP, which came in just below the 100 SMA on the daily chart. The signal had hit the take profit target beforehand, so we pocketed the pips.

The Euro and other forex majors are slipping lower, and, doubtful as it may be, this may signify the beginning of the big reverse. We can call it a retrace, but whatever we call it, unlike many other majors, the GBP is not retracing or reversing lower. 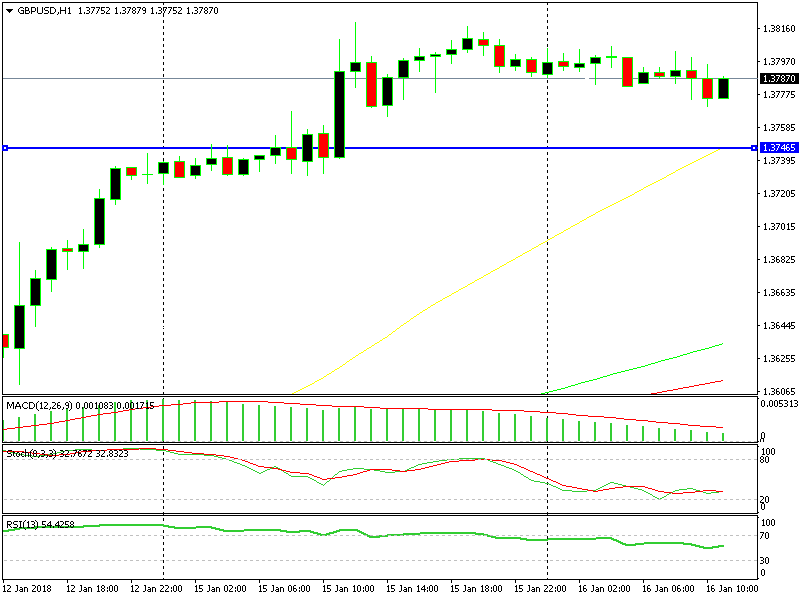 The area around 1.3750, should provide some support if we slide down there

The GBP/USD is holding up pretty well, which may be credited to the CPI report, shortly to be released. It is expected to decline to 3% from the previous 3.1%. Although, this is still quite high, and remains above BOE’s 2% target.

The core CPI number is also expected to tick lower at 2.6%, from 2.7%- again, still quite high. Based on the current price action, I believe that the risk remains on the upside. If the numbers don’t prove to be too low (3-4 ticks below expectations), the GBP will likely climb higher. That will leave the BOE with a finger on the rate hike button.

Alternatively, if the CPI number is negative, but not too low (1-2 ticks below expectations), we may see a short lived tumble yet. The 1.3750 area looks like an  opportune place to look for longs if this occurs. It provided a bit of resistance yesterday, and the 50 SMA is standing just around there. We will have another look at this pair once more if the GBP/USD slides down there.