Forex Signals US Session Brief, January 18 – USD and Cryptocurrencies Make a Reversal, but the Hardship Is Not Over Yet - Forex News by FX Leaders

Forex Signals US Session Brief, January 18 – USD and Cryptocurrencies Make a Reversal, but the Hardship Is Not Over Yet

The US Dollar and cryptocurrencies have been beaten up badly recently, but yesterday these instruments decided to get up and give it a fight. They formed some chart setups which point to a reversal higher. But the troubles are not over yet, not until the reverse really takes form. 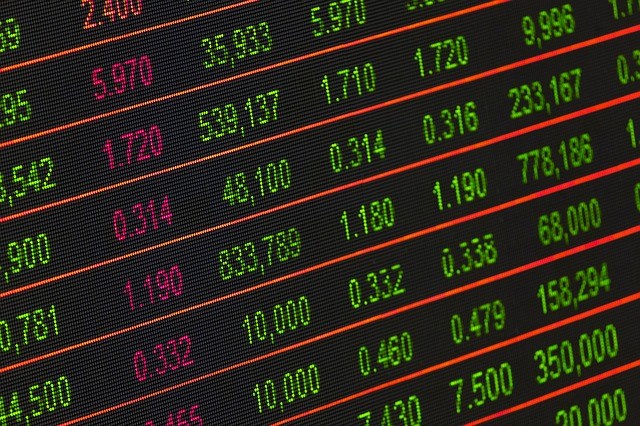 The tumble in Cryptocurrencies continues

The USD Had A Jump-Start Yesterday, but It Hasn’t Come to Life Yet

After such a terrible period, the USD surprised us yesterday when it jumped about 100 pips higher in the evening. It made a quick reversal and ended the day at the highs. The reversal is a bullish signal; the close near the highs of the day is another bullish signal.

The jump came after a couple of FED members delivered some hawkish comments, more notably, Kaplan who used to be a dove. They were both impressed by the US jobs market and Kaplan mentioned rate hikes quite a few times. He banged the drums for more rate hikes than the two that the market is expecting for 2018.

Those comments gave the market the idea that the FED might be more aggressive than first thought with rate hikes this year. That comes a few weeks before the next FED chairperson is elected which we know it will be Powell.

That said, we are not seeing a continuation of that upside move today. EUR/USD dived and closed below 1.22 yesterday, which was a good sign, but today we’re back at 1.2250s. USD/JPY moved to 111.40s from 110 lows, but some moving averages are limiting the upside.

This is not a good sign. If the reverse is to happen, the USD must keep moving higher. Although, big reverses don’t just happen in one or two trading sessions. Perhaps the US economic data later today will give the buyers another reason to buy again.

It seems like the decline is cryptocurrencies has finally come to an end. They lost quite some ground since topping at the end of December. Ethereum fell to $760 at some point yesterday from $1,400 a few days ago.

Litecoin Mini was trading at $336 before Christmas, but it reached $135 yesterday, which is nearly 1/3rd of the value. Bitcoin dived below $10,000 and almost reached $9,000. This means losing more than half its value in less than a month.

But, today the picture doesn’t seem so gloomy. Crypts are back on their feet and they are pushing higher, albeit slowly. So, now it looks like the reverse is taking form for altcoins.

Actually, it started yesterday and by the end of the day, the signs were very strong. All major cryptos had stopped right at 50 or 100 moving averages on the daily or weekly charts. Besides that, they formed dojis and hammers with the daily candlesticks, which are strong reversing signals.

But unlike the USD which is moving lower again today, crypos are still pushing higher. So, the price action today is another signal of the reverse. Let’s see if the climb will continue further in the next few trading sessions. 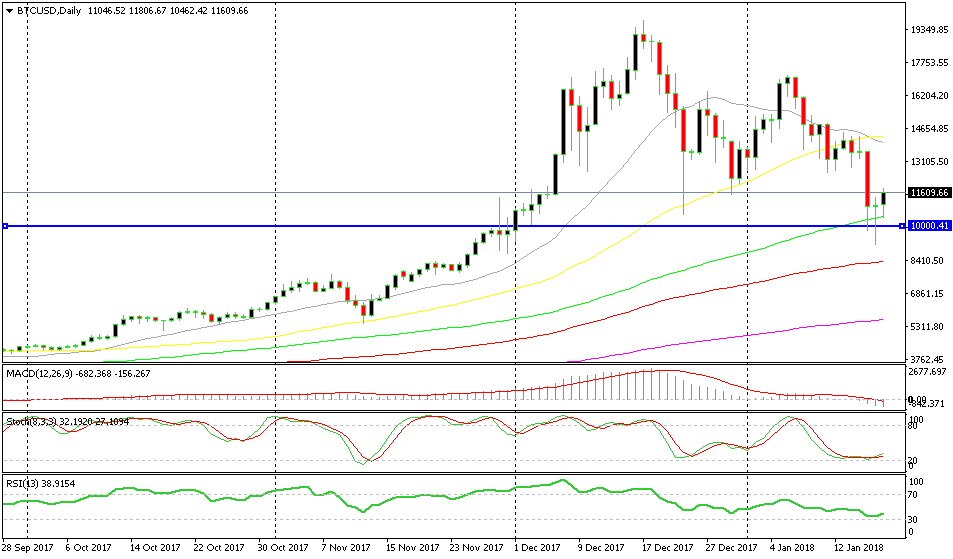 This is the perfect chart setup for a reverse 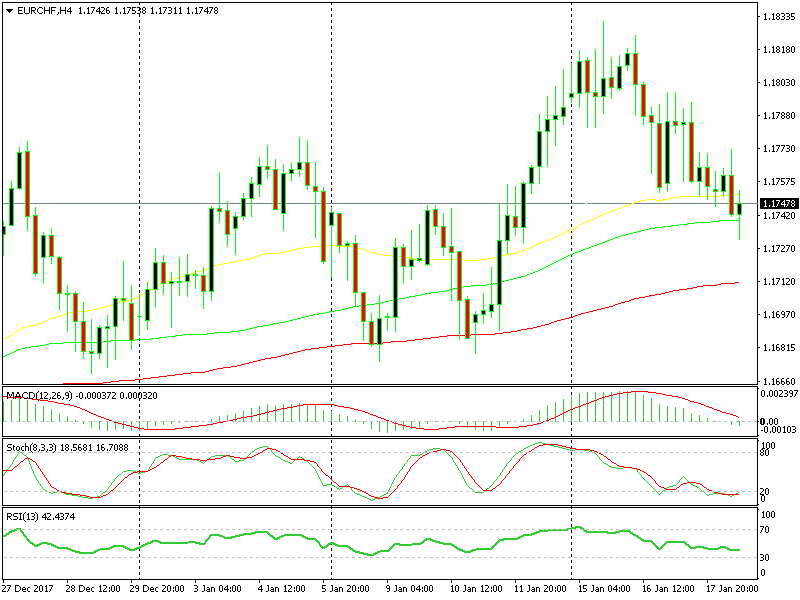 We opened two buy forex signals in EUR/CHF yesterday in the evening. We closed one of them manually for a 20 pip profit, while the other forex signal is still on. This pair has retraced lower this week, but the retrace seems to be almost complete on the H4 chart. Stochastic is oversold and the 100 SMA is providing support, so hopefully the uptrend will resume soon.

The US Dollar is still declining today, but the decline is slower. That gives us the impression that the buyers are not that confident today. Perhaps, the US data later today will give USD sellers another reason to be scared, we’ll see.