USD/JPY has been following a steep downtrend in the last three weeks, basically, since the New Year began. I have been highlighting two big support levels this week, one at 110, the other at 108. The level at 108 stretches all the way to 108.80 as a major support area.

After breaking below 110 earlier this week, we headed to 108, so our attention has been on this level in the last couple of days. Yesterday we got close to that level; USD/JPY fell to 108.50 in the evening. 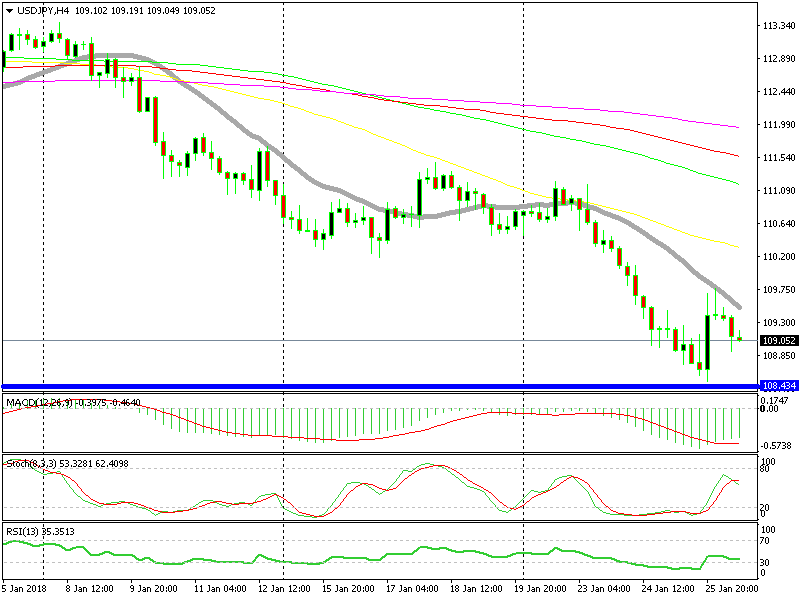 But, Donald Trump entered the scene and he shuffled the market. As we mentioned in the previous update, Trump said that a strong USD is good for America and the whole market reversed.

USD/JPY jumped about 120 pips higher and it seemed like the big reverse was happening. But, the jump stopped right at the 20 SMA (grey) on the H4 chart. We are trading 70 pips lower from the top now, and at some point this pair slipped below 109 again.

So, there’s no follow through on yesterday’s jump. The Buck is down against all major currencies today, so USD/JPY wasn’t going to be any different. Although, the positive sing here is that the USD is not making new lows.

USD/JPY looks hesitant to move below 109 today. So, all is not lost for USD/JPY bulls. The market is waiting for more hawkish comments from Trump; if we get them, I think this forex pair will make another surge higher and reverse the trend.