Over the last two months, NZD/USD has been trading in a constant uptrend, gaining approximately 600 pips from the bottom to the top. Yesterday morning, however, it looked like this pair was turning bearish.

The USD had made some considerable gains across the board, and NZD/USD was slipping lower. Compared to this Forex pair, AUD/USD was looking quite bullish. The Aussie traded sideways, while NZD/USD had lost approximately 150 pips. The disappointing inflation numbers from New Zealand weighed heavily on the Kiwi, and as a result, the picture became bearish yesterday. 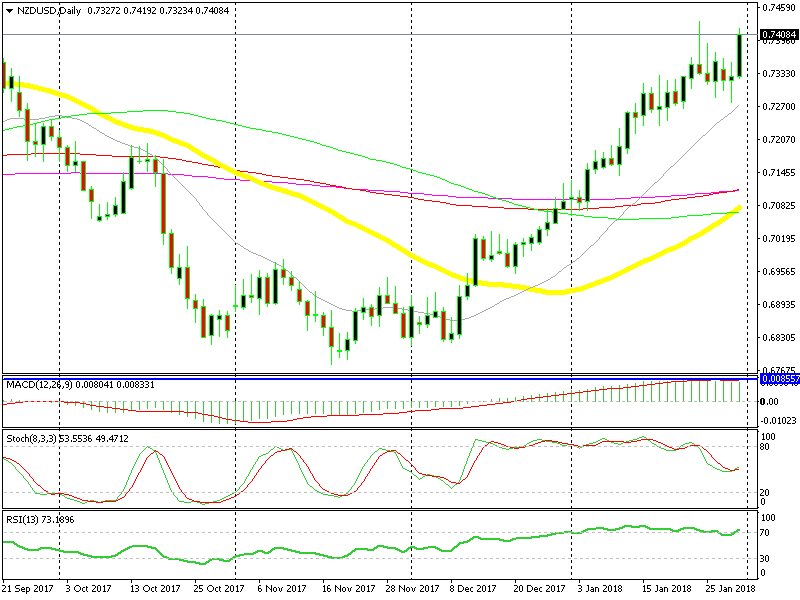 The 20 SMA has turned into support now

The USD bashing resumed, and this pair reversed higher. The low yesterday came just a few pips above the 20 SMA (grey) on the daily chart. This moving average had been providing resistance in 2017, during the downtrend. It now seems as though it is becoming support.

The price action yesterday proved to be yet another bullish signal, with the Aussie diving for approximately 60 pips, after the Australian inflation numbers missed expectations. The NZD usually follows the Aussie, but last night it went its own way. The whole picture is completely bullish for this pair. We will look to buy NZD/USD now, until this pair becomes bearish.