As I mentioned in the previous forex update, the GBP was likely to take a dive if the services report came in below 53 PMI points. Well, it came exactly at 53 points and that did send the GBP about 30 pips lower.

The officials who released the report said that growth of new work was weak and that the pace of economic growth slowed sharply in January. They also said that this puts the Bank of England (BOE) into dovish territory. There are indications for a weaker upward price pressure, so no need for the BOE. 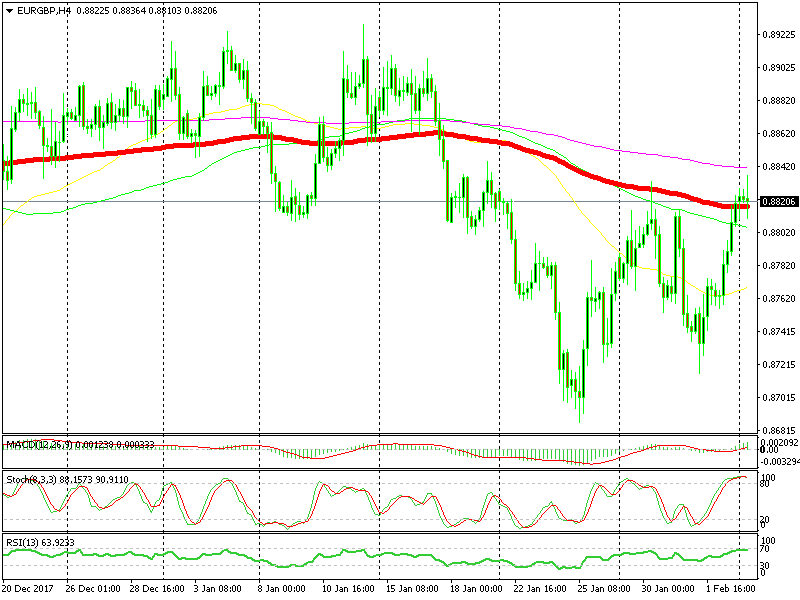 The report sent the GBP diving about 30 pips, while EUR/GBP jumped 20 pips higher. We are more interested in the latter pair since we have a live forex signal we opened last week.

The price jumped higher in EUR/GBP but missed the SL target of our forex signal by just one pip. EUR/USD climbed this morning, but the 50 SMA on the H1 chart rejected the price. This helped the reverse in EUR/GBP as well.

This pair is now just above the 100 SMA (red) which has provided support many times before. The price has pierced this moving average briefly before but has reversed after doing that. It is possible that this moving average will turn into resistance now causing the price to reverse lower.

The stochastic indicator is well overbought on this timeframe chart indicating that this pair is overbought. The daily chart is also nearly overbought and the 100 SMA is standing above the current price, so we hope that the reverse down takes place soon.