Another Timeframe Chart We Missed in USD/CAD

In the US session brief we talked about USD/CAD among other things. This forex pair has been trading on an uptrend for about a week or so, but this morning it retraced lower. Although, the 100 SMA close the door for sellers on the H1 chart and it started to move higher again after failing to break below it.

I didn’t look at the H4 chart though, or the Oil chart, since it is closely correlated to the CAD. I usually look at different timeframe charts before opening a forex trade, but we haven’t issued a signal in this pair yet, so we’re taking a look at this timeframe chart now. 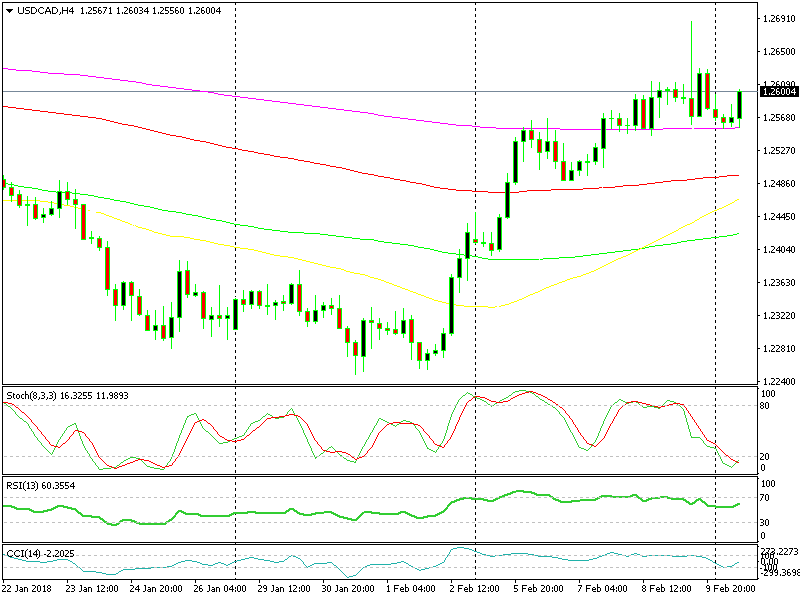 The 200 SMA is the indicator to watch in USD/CAD

As you can see above, USD/CAD started surging higher in early February as Oil prices started tumbling. The price broke above all moving averages, which later turned into support. The price has retraced to the moving averages and they all provided support before the next leg higher.

By the middle of next week, this pair broke the last moving average, the 200 MSA (purple). The upside hasn’t really extended since then, but at least this moving average placed a line in the sand for this pair.

Now, it seems like this pair is resuming the uptrend again. The stochastic indicator became oversold today and the price formed a couple of morning star candlesticks right above the 200 SMA. This was a sign that the retrace lower was over.

The price is about 40 pips higher now, so it seems like the next leg of the uptrend has already begun. We might go long here or wait for another retrace lower before pulling the trigger. Although, the trend is bullish so we are only looking to buy.