Shorting USD/JPY at the 20 SMA

USD/JPY has broken all support levels that were standing in the way. Last week, it broke the 108.50 level, while this week the 108 level waved goodbye to us. We did make use of that level with a sell forex signal from that level as this pair was retracing higher.

Yesterday, the sellers pushed past the 107 level and today this forex pair got pretty close to 106. So, the bearish trend is pretty obvious in this forex pair. Japan has nothing going on that could justify this strong move, so it is coming mainly from the USD side. 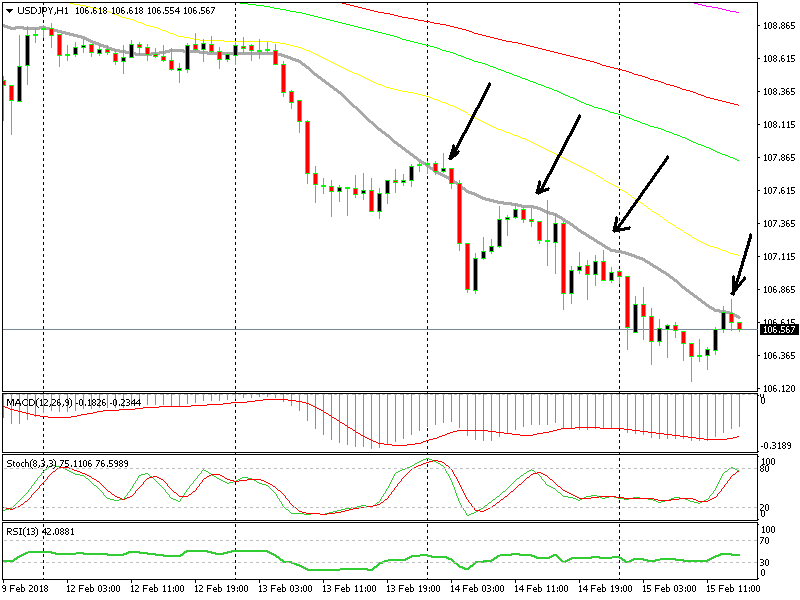 In the last few hours though, we are seeing a retrace take place in this pair. USD/JPY has climbed about 60 pips from 106.18 to 106.80. But, it seems like the retrace has run its course.

The price reached the 20 SMA on the H1 chart and it was having trouble get past it. This moving average has provided resistance three times yesterday. So, it seems like this moving average is doing the same thing again today.

The previous hourly candlestick closed as a morning start, which acts the same way as the doji. It is a reversing signal after a trend. The bigger trend is down but in the last few hours this pair has been trending higher, which in fact is just the retrace of the bigger trend.

Apart from the morning star candlestick, the stochastic indicator is overbought on the hourly timeframe chart. This means that the retrace up is over now that this chart is overbought. So, we decided to go short based on this chart setup. We are already in profit with this signal, but let’s see if it will progress further below.