The US Dollar has begun to reverse after a year of trending down. We opened two live long term sell forex signals, one of them in AUD/USD. We are more than 200 pips in profit with this signal, but we have decided to let it run further. We will explain why below. Cryptocurrencies continue to trade normally as the volatility has decreased, but the bias is still bullish for them.

We opened a forex signal in AUD/USD early this month. We decided to go short on this pair after it had climbed nearly 500 pips higher in the previous two months. The 100 SMA was standing up there on the weekly chart and it was providing some sort of resistance.

Last year, the price moved above this moving average twice and climbed above 0.80. Eventually it reversed lower and headed down again.

So, we should have waited for this pair to have another attempt higher to 0.81, like it did. The trend in December and January was very strong as the USD was falling through an air pocket, so AUD/USD moved above 0.81 again.

We held on to that signal and eventually the price reversed back below the 100 SMA. The first downward wave came early this month as this pair lost 400 pips. There was a pullback higher, but the downside resumed again and it has been picking up pace in the last few days.

The price has moved below the 50 SMA today so the sellers remain in control. That is one more obstacle that the sellers overcame. The next target is at 0.76 where we can find the 100 SMA. So, we are deciding to let this forex signal run further, even though we are more than 200 pips in profit at the moment.

Last week, cryptocurrencies were retracing lower after trending higher in the previous two weeks and doubling their value. But the retrace lower came to an end on Monday and the crypto market started grinding higher again.

Bitcoin climbed from around $9,000 to $11,000 in two day, but another retrace lower followed yesterday. Altcoins kept sliding all day yesterday. If you have notice, cryptocurrencies are pretty trendy and the trend goes on for a certain period.

If you see the daily Bitcoin chart, this digital currency moved higher exactly for two weeks after the big pullback lower in January. Then, the retrace that took place last week last for a week exactly, Monday to Monday.

This week, we have seen Bitcoin climb higher for two days and then retrace again lower for a full day, yesterday. Today the uptrend is on again. So, cryptos are following a pattern it seems. They remain bullish for a period of time, then they turn bearish for another period.

The problem for cryptocurrency traders is to define how long a period is. The trend used to go on for weeks at first, now it is shifting within days. Although, they still remain bullish. Bitcoin has moved above the 20 SMA (grey) on the weekly chart today. This moving average used to provide support last year, but it has now turned into resistance. I think that the buyers will become more confident if the weekly candlestick closes above this moving average. 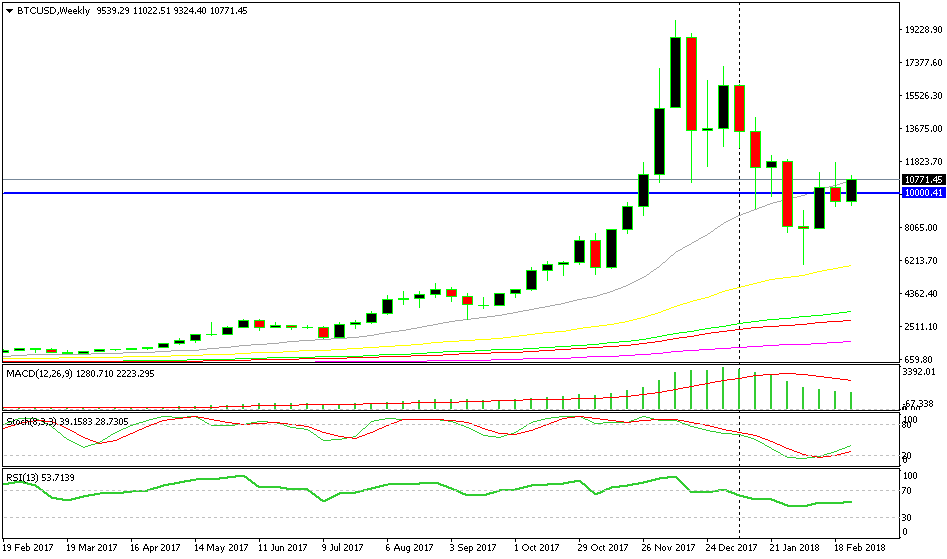 The 20 SMA is finally letting go 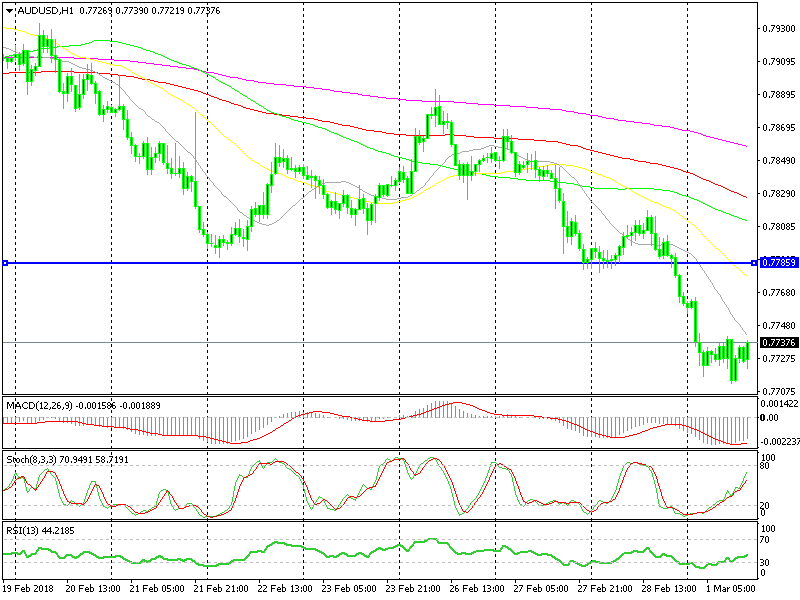 Getting ready to sell this pair

We sold NZD/USD a while ago, but I’m thinking of opening another sell forex signal in AUD/USD. The downtrend sped up yesterday but a retrace is happening at the moment. This retrace seems nearly over now since stochastic is almost overbought. Besides, the 20 SMA is catching up with the price and it will likely provide resistance.

The forex market has been pretty quiet today so far, with a slight demand for the USD. The FED Chairman Powell is due to testify in about an hour, so I suppose the market is expecting him, that’s why it’s been quiet today. Let’s see how bullish he will sound today.