Triple Top on USD/CAD Exactly at 1.30

USD/CAD has been flirting with the big round level at 1.30. This level has provided support and many times in the previous few years, but late last year, 1.1920 turned into the big level. It provided resistance several times from October to December, but now 1.30 has taken its spot again.

As you can see from the hourly chart below, the buyers pushed this pair up and tried to break the 1.30 level three times in the last three days. But they gave up right three times, twice at 1.30 exactly. It is pretty rare to see these big technical levels work exactly to the pip and even rarer to do it twice. 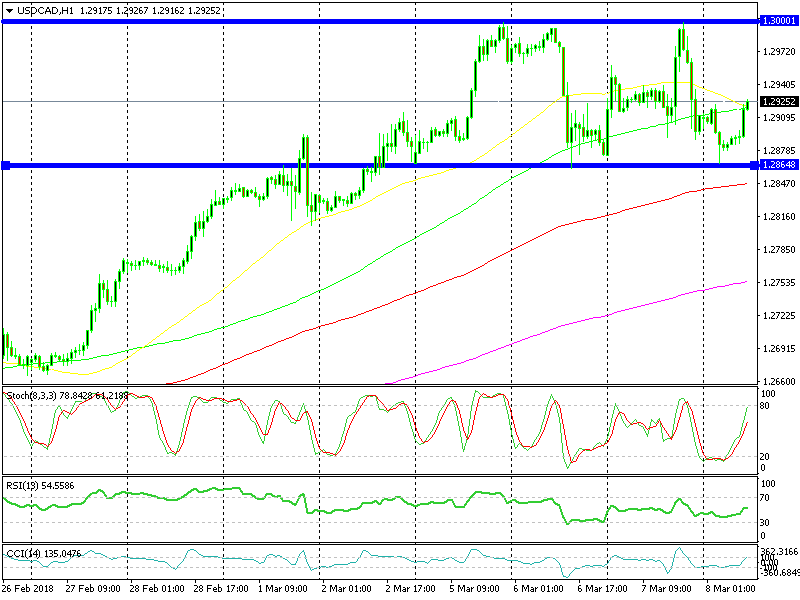 Now a range has been formed on this pair

After the second try on Tuesday morning, the buyers called it off. This forex pair turned down and ended up about 140 pips lower as commodity Dollars received some strong bids after peace comments from North Korea.

But yesterday in the afternoon, the White House commented that Trump is due to sign the proclamation on Steel and Aluminium today. So, USD/CAD jumped higher and it reached 1.30 again. Although, it couldn’t break above it so it failed for the third time.

It made a quick reversal and ended up more than 100 pips lower in just a few hours. That came after White House commented again that there may be exemptions from tariffs for Mexico and Canada. They said it is for security reasons, meaning imports for military production.

So, this forex pair tumbled and now 1.30 looks like a really strong resistance. The fundamentals and technicals worked again on this pair right to the pip. Although, it is moving higher at te moment, so we’ll see if the buyers will have another try at 1.30 and whether they will break it this time.