The US Dollar has been beaten up this week, but on Wednesday the Buck started reversing and yesterday closed as a really bullish day for the Buck.  I don’t know what triggered all the buying yesterday because nothing changed fundamentally. So, I guess the market just wants to buy the USD.

Our long term forex signals in EUR/USD and AUD/USD are looking increasingly better as time goes by. Cryptocurrencies have stopped the decline, but I’m spotting a worrying sign, candlesticks are not working anymore.

Candlestick charts are much easier to trade

USD Making a Turnaround Except Against Safe Havens

So, the USD started reversing on Wednesday after the downtrend during the first half of the week. I didn’t look like much on Wednesday, but yesterday the USD bulls got all confident out of nowhere. The USD kept climbing and climbing without any resistance whatsoever.

EUR/USD fell from 1.2380 to below 1.23 yesterday. We have two live sell forex signals in this pair, one long term and another short term. I will explain the short term signal in the trades section below. Our long term sell signal is more than 100 pips in profit now.

We also have a long term sell signal in AUD/USD. That signal is nearly 200 pips in profit now as commodity Dollars took a beating yesterday and continue to slide lower today. Now, AUD/USD sellers are trying to break the support level at 0.7750. We might close this signal manually around here if the price action tells us that the sellers can’t push any lower.

The Kiwi is getting battered as well, although not as badly as the Canadian Dollar. As my colleague Shain highlighted yesterday, the 1.30 level is history now for this pair and the buyers are trying to break above the 1.31 level.

It seems like the risk currencies are getting hit hard, while safe havens are getting some strong bids. USD/JPY is back at 105.50 which is a major support level. Gold is running higher too, so, the market sentiment is negative, hence the strong decline in commodity Dollars.

Candlesticks Are Not Working As They Should in Cryptocurrencies

Candlesticks are a very important aspect of technical analysis. The show when the price is about to reverse at the end of a trend or a pullback. Those candlestick that do that job are the pins, dojis, hammers and morning/evening starts.

Candlesticks also show when an instrument is in a middle of a trend and the trend is about to push higher. These candlesticks are called bullish or bearish engulfing candles.

Candlesticks work pretty well in forex and they have worked reasonably well in the cryptocurrency market. But recently, these candlesticks are not working as they should for cryptos.

As you can see from daily Bitcoin chart below, the price moved higher after the doji about two months ago, then it reversed back down by mid-February after the upside down pin below the 100 SMA (green). At the end of February, Bitcoin made a small doji above the support area at $9,200, which followed by another reverse higher.

The last candlestick to show a reversal formed about two weeks ago, and Bitcoin revered the next day. Since then, we have seen a few doji and pin candlesticks, but we’re not seeing a reverse higher. We saw a doji about a week ago and again three days ago just above the 100 SMA (red).

But the reverse didn’t come. Yesterday the price formed another pin which is signalling a reversal, but the reversal is just not happening. So, the candlesticks are not working that good recently for cryptos. This point to further bearish sentiment in this market. 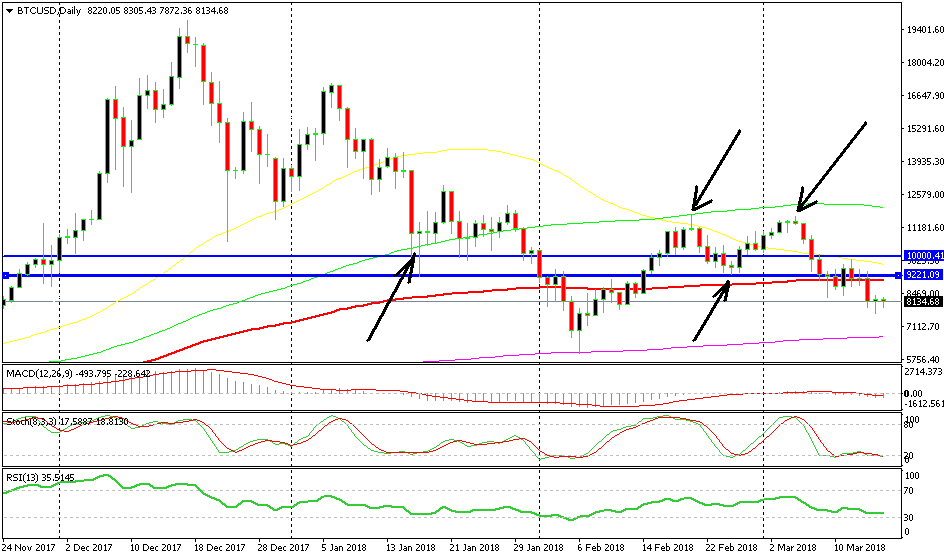 Yesterday’s pin is not followed by a bullish candlestick today, although it’s still early until the day ends 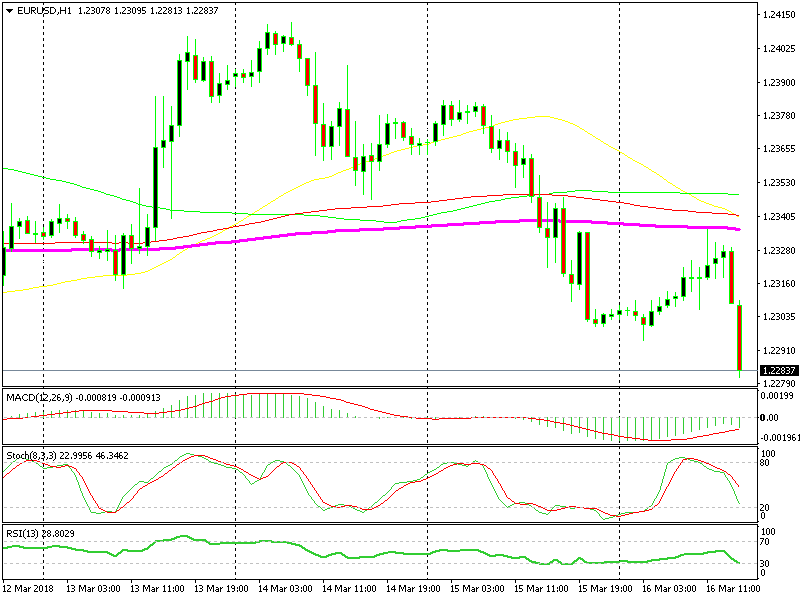 The next leg of the downtrend is now underway

We opened a sell forex signal in EUR/USD when we posted the update about the GBP/USD. By the way, if you took that trade, you should be well in profit as that pair has turned south now. So, has EUR/USD and it wasn’t difficult to spot. The trend is down, the retrace up was complete since stochastic was overbought and the moving averages were providing resistance on top.

Today is Friday and the week is drawing to a close. The US Dollar is in full swing at the moment, so it looks like this will be one of the rare weeks when the Buck ends it while being in charge. Our EUR/USD signal just hit take profit, while the long term signals are advancing further, so it is a good day. Let’s keep it like this until the end.