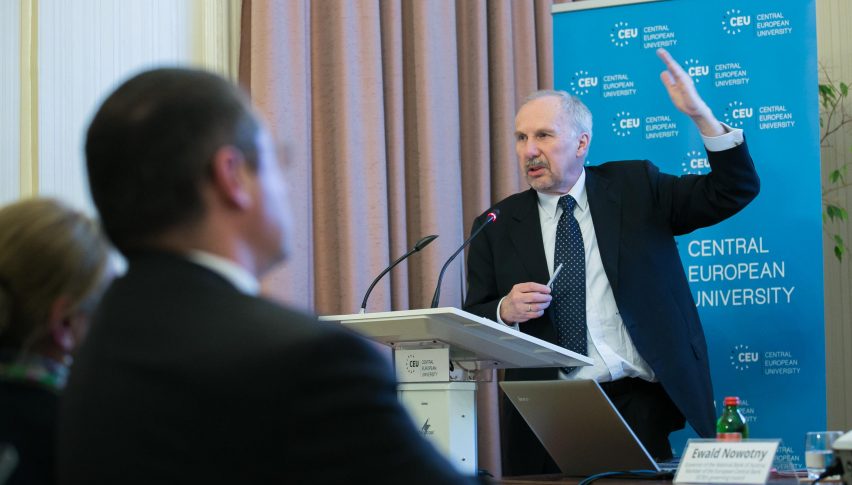 Nowotny is talking about rate hikes

The market sentiment has been negative for some time, but it has shifted in the last few days. As a result, the commodity currencies have been grinding higher, particularly in the last two days. The central bankers have been trying to keep us busy, making hawkish comments which has helped improve the sentiment further. Central bankers used to be so grim for about a decade but they are starting to change.

BOJ’s Kuroda Knows When to Strike

The Bank of Japan Governor Kuroda was out this morning doing his job in scaring off JPY bulls. He hasn’t been very successful in trying to stop the steep decline in USD/JPY during the last three months, but now the situations has changed and Kuroda has become more confident.

USD/JPY has reversed the trend in the last two weeks so I bet Kuroda is watching the charts. I say so because when the Yen is on a bullish run and USD/JPY is on a bearish trend, Kuroda holds back as he knows he can’t do much to change the negative market sentiment. He has lost face so many times in the last several years trying to talk USD/JPY higher, but eventually failing.

The market sentiment is global and Japan is not a big player at the moment. So, there’s not much to do for the Japanese if they want to improve the market sentiment, which usually sends the JPY lower and USD/JPY higher.

The here month decline in USD/JPY has stopped and USD/JPY has been on an uptrend during the last two weeks, so Kuroda decided to give some dovish comments, which are bullish for USD/JPY. Here are some of his comments:

The Chinese vice commerce minister is calling out on other nations to protect the World Trade Organisation. But, no one wants to get between two giants when they’re fighting. So, China’s pleas have gone unheard recently. He also said that China is unwilling to fight a trade war but not afraid to do so.

The Chinese prime minister Li was also out today saying that trade war will only hurt everyone’s interests. But, Trump is obsessed with China-US trade balance so nothing will change his mind.

Update: Nowotny just said that the ECB will end asset buying this year. He added that the ECB could lift repo rates from -0.4% to -0.2% to start the normalization. The Euro has started to move and EUR/USD has just jumped 50 pips higher now.

The Surge in Commodity Dollars Continues

Commodity currencies have been trading in a downtrend in the previous two months, particularly the Aussie and the Canadian Dollar. The Kiwi has been a bit more resilient. One of the main reasons that the commodity Dollars have been feeling heavy during this time is that the market sentiment has been negative.

When the sentiment in global financial markets is negative, commodity currencies fall while safe haven assets rally. Hence the rally in the Japanese Yen and Gold in the previous months. USD/JPY lost around 9 cents since the beginning of the year as the JPY strengthened.

But, the situation is starting to change and the sentiment is shifting from negative to positive. Gold is not making new highs, while USD/JPY has made a reversal from the lows below 105 and it is trading now at the 107 region. 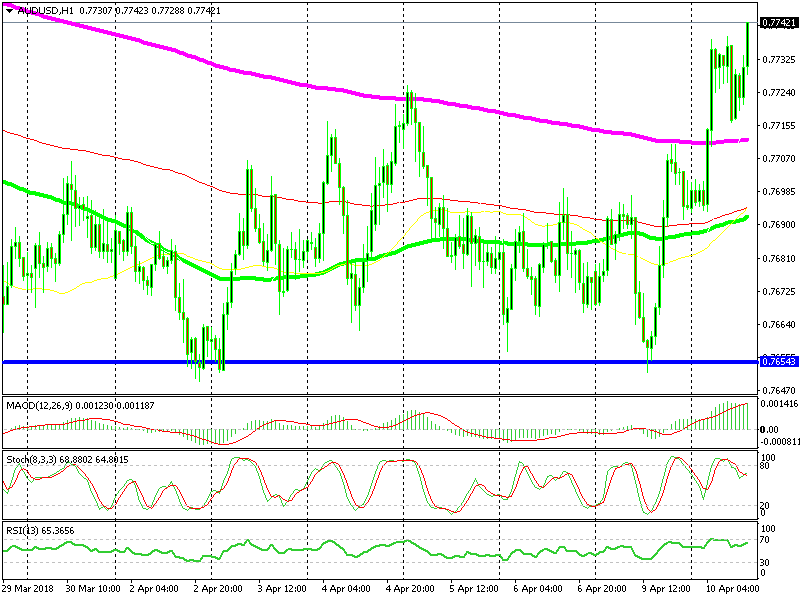 The 200 SMA looks like a good place to buy

Yesterday we had a buy signal in NZD/USD which was closed in profit. The buyers remain in control on commodity currencies today again so we are thinking of buying AUD/USD. We will wait for a retrace to the 200 SMA (purple). This moving average has been resistance previously and it is expected to turn into support.

Nowotny got things started now as the Euro spikes higher on his latest comments for Reuters. The US PPI report will be released shortly, so let’s concentrate on that now. By the way, our EUR/CHF buy signal just hit take profit on this Euro spike.