Seeking Cover Behind the 50 SMA on EUR/CHF

Yearly Lows Just Above 1.0635 Are Quickly Coming Into View For The EUR/USD.

Last Thursday we opened a buy forex signal in EUR/CHF. This forex pair has been on a solid uptrend for about a year. It kept breaking level after level without many pullbacks lower. The only decent pullback was earlier this year when EUR/CHF retraced 400 pips lower.

After that retrace, the bulls became active again and the solid uptrend resumed again. This pair got pretty close to the major level at 1.20 last Thursday. This point was the line in the sand for the Swiss National Bank (SNB) until January 2015 when it was removed quickly killing the forex market.

That same day, this pair started retracing lower and we decided to go long at the 50 SMA (yellow) on the hourly chart. That timeframe chart became oversold and the 50 SMA was holding on, at first. But, EUR/CHF traders were looking at the H4 chart apparently and the pullback stretched further below it. 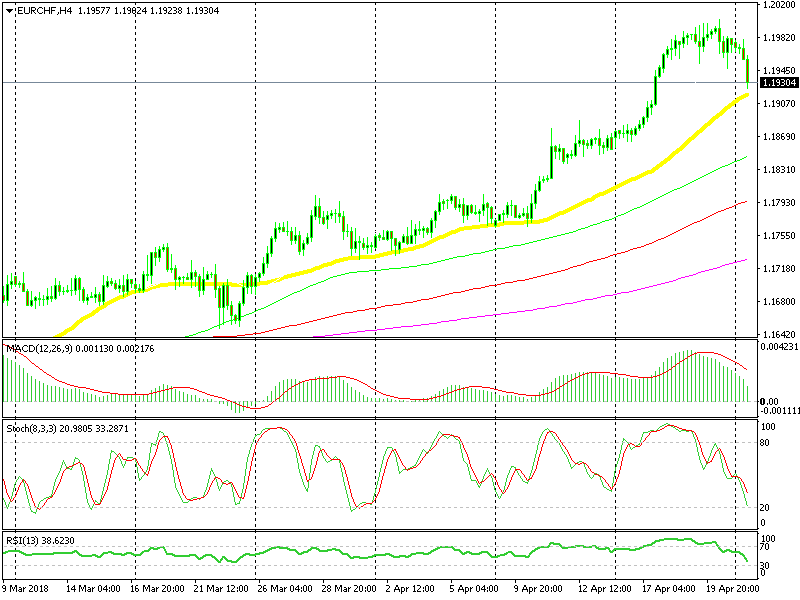 We’re counting on the 50 SMA now

The pullback continued on Friday and is continuing today. Initially, we placed the stop for this forex signal at 1.1933 but decided to move it lower a while ago.

As you can see from the chart above, the 50 SMA (yellow) has been a solid support, particularly over the last two months. The sellers have managed to push the price below this moving average only once during this time and even then, they couldn’t push very far.