Shorting AUD/USD After the FED - Forex News by FX Leaders 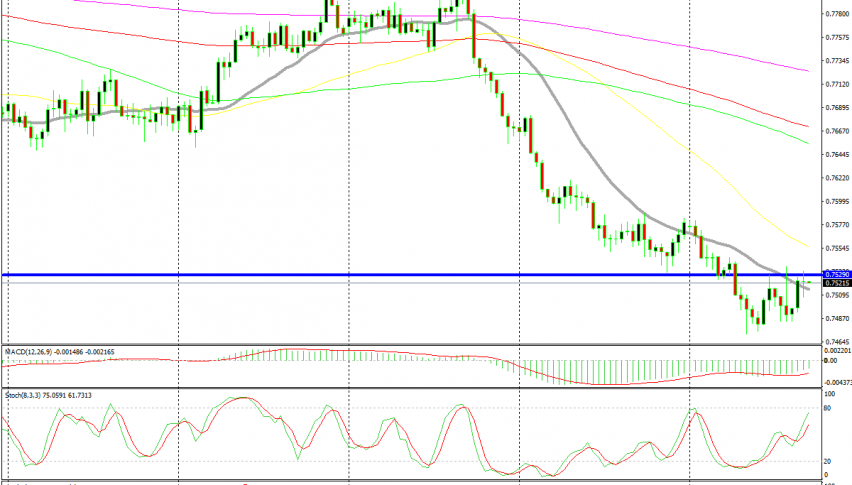 Shorting AUD/USD After the FED

The 20 SMA is providing resistance once more

We just went short on AUD/USD. We opened a sell forex signal a while ago while the 100 SMA (green) was providing resistance on the H1 chart. It has been providing resistance to this pair for about a week and it is still is doing the same. The chart setup was what got me interested in selling this forex pair. Although, I made the final decision based on the H4 chart.

As you can see, the trend in this pair has been massively bearish for about two weeks. The retraces have been pretty minimal. They aren’t even proper retraces, they have been more of consolidations before the next move down, which shows the strength of the bearish trend.

So, we are on the right course now. The FED didn’t sound particularly hawkish yesterday as the market was expecting it’s release and we have seen a pullback on USD pairs overnight. But it seems like this trend is not changing. The downtrend remains intact and we are using this pullback opportunity to go short on AUD/USD.

It seems like the retrace is almost complete. The stochastic indicator is almost overbought and the 20 SMA (grey) is doing its’ job again. It has provided resistance this week, reversing the price to a lower level and is likely to keep doing the same.

Besides that, the last H4 candlestick closed at a perfect doji. The doji is a reversing signal, particularly after a retrace like the one we are having now.  I almost forgot, the level of around 0.7530 has been providing support previously, so it is likely that it provides resistance now. This is our trade, so let’s roll with it now.